Colonial Parkway - Deer, Hedgehogs & Varmints But No Making Out 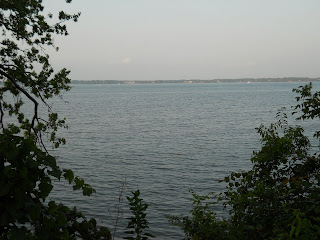 Once I finished visiting my son and his girlfriend, I hopped back on the Road King and headed west. Sunset was coming on but I still felt like riding a challenging road on my way to wherever I was going. After crossing the bridge-tunnel from Norfolk into Hampton, it occurred to me that the Colonial Parkway might be a nice diversion.


I had gone to high school in this area so I was quite familiar with it. One of the places that I liked to go was to something called the Colonial Parkway in Yorktown. It is a 23-mile stretch of road from Yorktown to Jamestown. The Parkway is windy and tree covered as it meanders down the coastline from one historic site to the other. When I was in high school, I would end most dates at one of its many pullouts overlooking the ocean. It was romantic to high school kids who didn't have their own apartments. 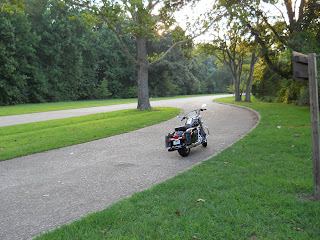 As I rolled down the highway and started to go toward the Parkway, I quickly realized that all the landmarks that I knew were gone. New shopping centers and strip malls had taken their place. The other problem was that I had never been out here in the daylight; that was not a big help either. I was about to give up and break out the GPS when I saw a sign that saved me. We all know real men and bikers never get lost.

Right before I turned onto the Parkway I was treated again to the ballet of hawks in the sky above me, not sure if this was an omen or not but it was pretty. When I got to the Parkway from the road I noticed something else I'd forgotten about it -- -- the Parkway was not concrete, blacktop, or cobblestone; it is a blend of concrete and pebbles which has a slippery surface because the years of use has worn down and smoothed the pebbles. I was leery but not overly concerned. 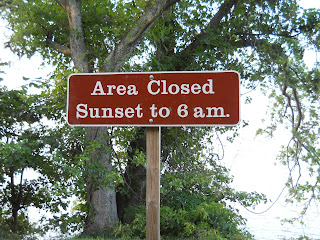 The ride was a blast. I'd forgotten how pretty the scenery and ocean view was. Then I saw a sign that broke my heart. My favorite place was no longer usable as a make-out spot. After all, nobody goes to make-out before Sunset. Very saddening.

I saw herds of deer and many hedgehogs and other small varmints near the road as I cruised through it. I pulled off at a few more places to enjoy the various views of the bay and then when I reached the end I jumped back on the highway and proceeded west until I got caught up in the traffic jam of people leaving Busch Gardens in Williamsburg. Actually it wasn't a full up traffic jam it was just a few miles of very slow going. After I was beyond the traffic it was smooth sailing until I reached the hotel. 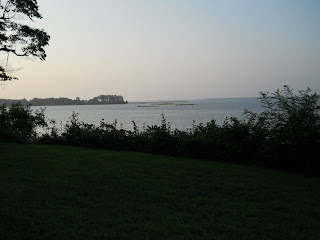 When I climbed into bed that night, I realized how sore I was from sitting in the same position for several hours over several days. Nevertheless, it was a good sore.

The next morning I woke up and since I had to turn the bike in that day, I did not travel far from the turn-in point. I spent all the time I had left cruising through old neighborhoods in Richmond. I was enjoying the sunshine, and the feel of a good bike under me. This had been a great adventure and I loved all 702 miles of it.

A gentleman named Paul helped me get the bike turned back and I transferred all my stuff from the saddlebags back into a suitcase. I then jumped in the car and headed north to the airport. As I looked at the traffic coming towards me, going south, I would see the occasional motorcycle and my hand would want to wave, but I wasn't a rider for this part of my journey.