It isn't often that you get a chance to test drive brand-new Harley-Davidson's. However, our local dealership was lucky enough to be on the list for something called Harley Days that is where the HD Corporation brings out all the new models and let you test-drive anything you want to. Since I am still undecided about what I want to get next, the opportunity was perfect.

The test track was 8 miles of diverse road. You went through residential, city, country roads with a few good curves, a little highway, and then back on a city street. 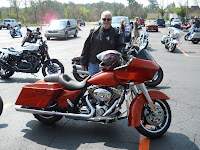 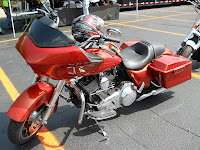 The first bike that I got on was the Street Glide. I was comfortable sitting on it, the wait was fairly balanced, and the controls were well-placed, except for the radio. The radio set in the fairing up front but it was at such an angle that while you were sitting on the bike you could not see the display. The other thing about the bike that I did not like was it had an electronic throttle. I would roll power on and nothing would happen, because there was a lag time. Therefore, I would give it a little more and about then everything would kick in. Not very happy with the way that acted; although I know, they can probably adjust it if you buy the bike.
The Elektra Glide Ultra Glide 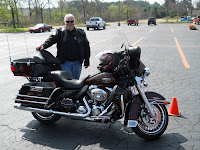 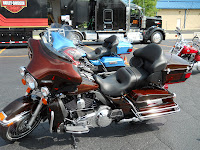 The next bike I tried was the one I was actually thinking about buying, it is the Cadillac motorcycle. It was very comfortable, easy to control, well balanced, and the dashboard was easily readable and accessible. Even though this had the same type throttle on it had been adjusted a bit tighter and I didn't have the same issues that I had on the Street Glide. If I buy a Harley, I want this one.
The Crossbones 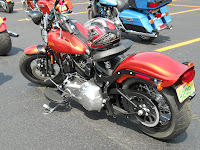 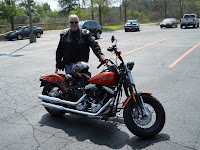 I tried something called Crossbones. It is a stripped down bike with a springer front end and seat. I did not like the way it acted. The springer suspension made the front-end balance and then seconds later the seat would balance. It reminded me of a rocking horse I had as a kid, it had four springs on it, and one at each corner and you would rock back and forth on it or bounce up and down. I swear, that is what riding this thing felt like.
The Harley Trike 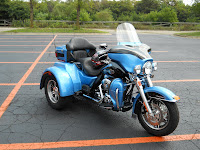 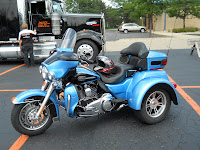 The final bike I rode was a trike. I had to watch a video and then cruise around the parking lot a little before we went out on it. I know the purpose of the trike is for older riders or people who cannot handle the full weight of the bike or want something more stable. They probably serve that purpose very well. However, when I rode the trike I wanted to lean into curves, which you don't need to do. I wanted to put my feet down when I stopped, but if you do that, you run over your own feet. I was surprised at how rough the road but that was because it had the extra wheels without car style suspension. Trikes have their place; I am just not ready to ride one.
Well, the test drives did not change my mind about which bike I eventually wanted to get, again if I get a Harley. I will say that Harley makes a very stable and well-built bike. I like some things about some of the bikes, but they're things I just don't like about the bikes too. To bring in younger riders, Harley has started putting skulls on everything where they used to have Eagles. I'm more of an Eagle kind of guy. I like having a tachometer and a majority of their bikes don’t. A lot more to consider before I get to the point where I plop down cash to ride out on something bigger.