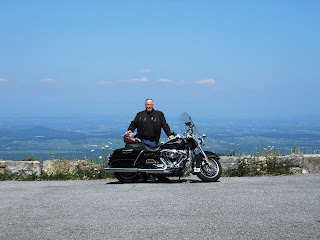 Skyline Drive is a wonderful 105 mile stretch of road that starts in Front Royal, VA, and goes to Waynesboro, VA.  It goes through and over the Blue Ridge Mountains.  The speed limit is a rigorously enforced 35 MPH, and aside from the curves and switchbacks, there are deer, bears, and other wildlife who cross the road at will.  A lot of the road (to quote Arlo Gutherie) has "mountain on one side and on the other side -- nothing."  It is an absolute blast in a car,  better in a convertible but now I know the way this road needs to be taken is on a motorcycle.  This was one of my better ideas.

The morning started with a quick breakfast at the hotel, and then I dressed out in boots, chaps, and jacket and hit the highway.  I was in Staunton where my son was living so I took a quick 10-minute drive down the highway to the south entrance of Skyline Drive.  The cost to drive the road for a motorcycle was $10, but that was for a whole week.  I paid the ranger in the booth, turned down the map she offered and rolled that power on.

I was still getting used to the bike,  and the south end (I found out later) has less dramatic curves.  The Road King was great while it was rolling.  Lots of power and it was pure ballet on curves.  When it was standing still, it handled like a baby whale.  Heavy and awkward to move around.

This first video is from the southernmost part of the ride.  The curves are not too wild,  but they are nice, and the scenery is beautiful.  This is the longest of the 3 videos. 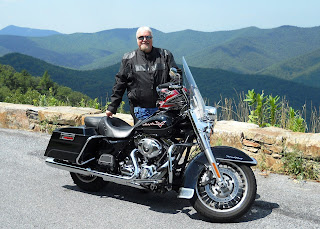 Along the way, I met a lot of other bikes doing the drive.  I stopped at this overlook and met 3 guys who had started out in New Jersey and were proceeding on south to the "Dragon's Tail" in the Smokies.  I hope to do that ride at some point myself.  One of them took this picture for me.

This is the shortest video but has me starting into some better curves and twisties.  I was having a blast, and I was getting used to the bike which made it more comfortable. 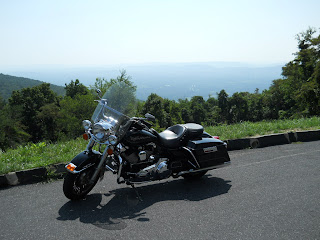 Stopped for lunch at a small diner at the midway point.  While I was eating, I saw a couple come in who could not find a place to sit, so I invited them to join me.  They were from Pennsylvania and were going to spend the night at the southern gate and then head back using a route through West Virginia.  Nice folks.

This video is of the most dramatic turns and twisties and even has a tunnel too.  This is my favorite of the three, and I wish I had time to ride this section again. 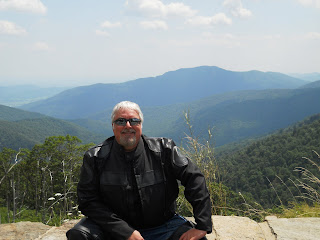 The run complete,  I turned the bike east, towards Tidewater so I could meet up with my son again at his new place there (he was in the process of moving).  I took a Highway 17 to get there,  which had its own beautiful views along the way. 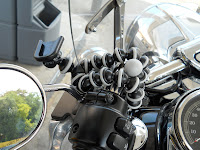 NOTE:  I shot the videos using the Nikon Cool Pix and something called a GorillaPod.  It is a bendable 3 legged tripod that can be adjusted to grip anything - even a handlebar.  I am glad I found this.  I still put a safety line on the camera in case the vibrations made it come loose.  I was shooting around the windshield rather than through it.