My adventure actually started a few weeks before I ever jumped on the bike and took off. I had to go to Washington DC for a class and decided to go down to Virginia to visit my son at the same time. Since I was going to have to rent a car, anyway I decided to look into the costs of renting a motorcycle instead. With that decision made, it was a short leap to realize that Skyline Drive was between DC and where my son lived. The cost of rental was not that bad so I went to the EagleRider website and made a reservation. I had reserved a Honda Goldwing.

A few days later, I got an e-mail from Lisa at EagleRiders who told me that the Goldwing was unavailable, so I said I would take a Harley Davidson Electra Glide Ultra Glide instead. Then I got a call saying that that was unavailable as well but they did have a Street Glide available for those dates and I said sure. Part of the reason why I was renting was to test ride some bikes that I was considering buying for my next bike. The Street Glide was never on my list but it would give me the feel for a Harley Davidson.

Friday, the day I was scheduled to pick up the bike, I called the store and told them that I was going to be a little late. At that point, the person at the shop told me that it was fine because the bike had a maintenance issue with brake lights, but he said he had a part due in and everything would be fine by the time I got there. No problem. An hour or so later I got a call saying that it was not going to be ready for me and that if I wanted it I could still have the bike but I would have to use hand signals. I said okay and then I started thinking about it. Unfamiliar road, unfamiliar bike, crowded riding environment, and me not used to using hand signals. I called him back and canceled.

That was a hard choice to make since I had brought along riding gear and was psyched for the ride. Then I checked the EagleRider website and noticed they had a store in Richmond as well. Therefore, I called the store in DC to see if they could swap the reservations of there. He gave me the number for the store in Richmond and told me they thought they could work something out. I called Velocity Motorsports the EagleRider franchise in Richmond and spoke to Carol who told me they had a Road King available for me if I wanted it, and they were having a special that weekend so it would be even cheaper. I grabbed it. I knew that Skyline Drive could be ridden going north or going south so all I had to do was reverse my plan.


When I took off out of DC at 2:30 PM I thought it would take me about 2 Hours to drive the 90 miles to Richmond. It took almost 4 hours. During the drive, I called Velocity in Richmond to let them know that I might be late and Carol was nice enough to work out a deal where one of their people named Zack would stick around until I got there. At one point I got a call from Zack was concerned as to whether I would be there by 6 and I told him I was doing everything possible to do so. He explained that he had a birthday party for his mother that night and needed to be off on time. At this point since Velocity had already been so nice I was doing everything I could to be sure I got there by 6. I may have even driven faster than the speed limit when the traffic finally thinned. In the end, I arrived about 5 minutes after 6 but Zach was nice enough to stick around to help me out. 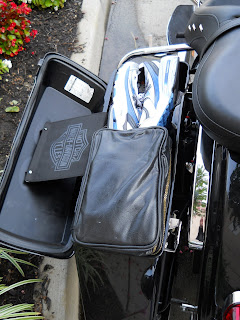 I unloaded everything out of the car and kind of threw it into the saddlebags. Zack gave me a quick orientation to the bike and helped me park my car in their locked parking area. At that point, I told Zack to go that I could handle it. I spent the next 20 minutes or so repacking saddlebags so that everything would fit and they would actually close. I have never done anything like this before and actually had no idea how much stuff would fit in the bags when I planned what I was taking. In the end, I only wound up leaving my 35mm camera behind because it just would not fit. I did take my Nikon Cool Pix with me since it did not take up much room and I had to get some pictures along the way. 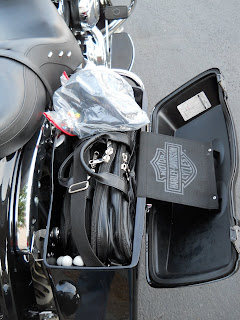 I jumped on the first Harley Davidson was ever going to ride and kicked it over. It being a new bike I did my usual check out of friction zone and touchiness of brakes. Once I was satisfied, I turned down the alley and headed for the interstate. I quickly took the bike up to 70 and noticed how much top-end I still had left. The bike still had plenty of power if I needed it. I looked in the sky in front of me and noticed the dark rain clouds, which according to the National Weather Service were not supposed to be there.
The wind was blowing into me going east as I was headed west and the rain was falling down. Now I was on an unfamiliar bike, on an unfamiliar road, in the middle of a thunderstorm. Two minutes later, I rode out of the rain, and looked up in the sky to see a pair of hawks gently gliding through the air looking for dinner. In front of me was a beautiful sunset. It was going to be a great ride. 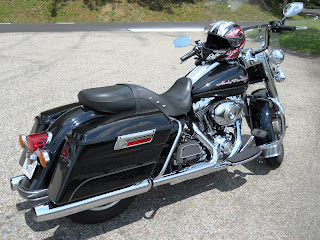 NOTE: I have always made it a point not to use real names on this blog. However, in the case of Carol, Lisa, and Zack I have chosen to leave their real names in case you ever need to get in touch with either at EagleRider or Velocity in Richmond and want to know some good people to work with, who bent over backwards to make my adventure a reality. Without them, I would have been sitting in Washington DC with leathers, my helmet, and all the other stuff I had prepped for the ride but nothing to ride on. Good people.