My intent originally was to describe vividly our ride of the Tail of the Dragon.  However, if you took time to look at the videos included with my last posting, you know there is no way that words would ever do it justice.  Therefore, I will say a few things about our ride and add a few words of advice to those who may follow us.

The weather was beautiful for our ride; it was not too hot or too cool.  As we went from the regular US 129 to the part known as the Tail of the Dragon we were greeted by a flatbed truck in the opposite lane.  I looked down in the woods beyond the edge of the road and could see a bike down among the trees.  Obviously, someone had run off the road on the curve.  There were several bikes around the truck who appeared to be friends of the rider who would gone off the road.  The rider appeared to be just fine.
After a few more curves we came to a section that had pull offs on both sides of the road.  This is what I feel is the start of the Tail of the Dragon.  However, those who are marketing this actually have it starting a couple of miles before that point.  According to the experts, there are 318 curves in 11 miles; I was too busy riding to count. 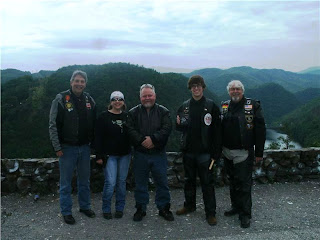 While at the pull off, we had a group picture taken by a gentleman who called himself the Phreak.  He was there shooting footage for his own video.

Along the road at three points there were photographers taking pictures of us as we went by.  Those photographers post their work out on the web so that you can buy it later.  A few of the pictures that were taken of us are included in this blog entry.  I think they did a beautiful job and I think the prices they are charging are very reasonable.

As usual, my son and I were using our Q2s to communicate during our runs.  It was a blast because some of the curves were exciting.  During this ride I figured out that I personally tend to do, my right turns better than my left-handed ones.  It probably has to do with the fact that I am right-handed.  When I became aware of that fact, I spent more time and thought on left turns I was taking to maintain better control over them.
In case you missed it, Tikk was riding the lead bike, a Harley-Davidson.  The next two riders were GrnEyes and Wakko both on Honda Shadows, although my son's was about 15 years older than GrnEye's bike.  I was next on my Honda Valkyrie and then bringing up the rear was Saginaw HillBilly on a Virago. 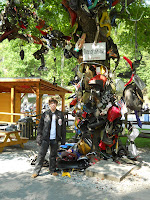 When we got to the end of the run, we pulled into the Deal's Gap Bike Resort and went in to buy a few souvenirs and patches.
About 20 years ago, people started attaching parts that had been broken off during their rides to a tree that is now known as the Tree of Shame.  There is a variety of things up in the tree, including what is probably hundreds of rearview mirrors.  I thought the warning sign about things falling out of the tree was also very appropriate. 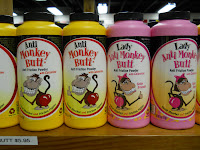 My son saw this stuff sitting on the shelf in the souvenir store; of course, we are all in favor of anything that ensures no more Monkey Butt. 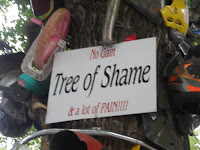 The return trip was just as much fun, but it was a bit more challenging for me since more of the turns were to the left then to the right.  Once we finished the run, we headed back to the cabin.  We were Dragon slayers one and all.
Advice for other riders:  Watch the video and notice the way that GrnEyes and Wakko were riding.  They were enjoying their own ride at their own pace and not being pressured by anyone else to go faster than they felt comfortable with or to take the turns tighter than their skills allowed.  This is the most successful way to ride the Tail.  It insures that you are doing things within your own capabilities.

There are dangers that you cannot control.  Not so much in the videos that I've posted so far, but you will see in the videos I will post later that we were being passed on blind curves by people riding crotch rockets.  If we did not stay to the far right-hand side of the lane to allow them to pass in the far left-hand side of the lane they might have been in the oncoming lane and gotten smeared by what was coming around the curve towards us in that lane.  The problem with that smearing is that they probably would've taken us with them.

There are cars on the Tail.  For some reason they seem to travel in packs of four.  I never saw one trying to pass anyone, but I did see one that had creamed itself on a curve.  When I saw the car, the front-end look like it had been ripped off like the top of a box and it was filling an entire lane of the road.  This means, if someone in that lane came upon it they would have to prepare to either stop or swerve around it.  You just need to keep your eyes open.  By the way, the cars that I did see included Lamborghinis, Lotus, Porsche, Audi, and several custom-made things without manufacturer's labels on them.

The speed limit is 30 mph.  There are Sheriffs, Deputies, and State Police all over the road and they were actively pulling people over.  So, keep an eye on your speed.  It was not during these first few runs but on our very last run down the Tail, I looked down to find my son and I doing about 40-45 on one of the few straightaways.

After we got back to the cabin, everyone kinda split up and went their own way.  Tikk, Wakko and I headed out originally intending to go to some roads that were a little further away.  Instead, we ended up near Robbinsville NC on the road headed to Bryson City, NC.  We were close to the Cherokee Reservation and the Nantahala Gorge.  I didn't know all that until I got back and someone from the area saw my video and told me that's where we had been.    We also rode something known as Moonshiner's 28.
I hope you enjoy the videos for these rides, I will write about them in detail in my next entry.
Somewhere In The Smokies
Moonshiner's 28
2686
Posted by Charles Schell at 17:23