"To The Trees!"  Came the call.  I knew I had heard that before, I just really wasn't sure where.  Maybe it was Robin Hood or it was in The Patriot -- of course, it could have been the rally cry of the Ewoks in Star Wars.  I guess it doesn't much matter which movie it was, each of them would have used the phrase to mean one thing:  "Leave and escape to Freedom".  After all, wasn't that what we were doing?
The plan was for Saginaw HillBilly, GrnEyes, Workhard, Steve in Red, and Gary all to meet up somewhere on the eastern side of the state, and ride an hour or so to the corner of Highways 57 and 66 where I would meet up with them.  It was simple. The most amazing part of it was that it actually worked.

I took off by myself at about 8 AM and headed north.  It was a beautiful day for riding; the temperature was about 65° or 70° I was dressed up in my full leathers that were perfectly comfortable at that temperature.  My Valkyrie had just come out of the shop having gotten a new tire and it was performing awesomely.  I cranked up the radio, rolled it on, and freed my mind.  There is just something about the feel of rolling down the highway on a motorcycle that nothing else in life matches. 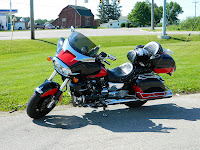 I arrived at the rendezvous point a little early.  So, I went inside grab a Coke and I was taking a few pictures of my bike because it was such a beautiful day.  A couple in a truck pulled up and a woman leaned out and asked if I wanted her to take pictures of me with the bike.  That really wasn't my objective, but I wasn't going to let an opportunity get away so I posed while she shot a few pictures of me.  A short conversation ensued with her and her husband concerning where I was going.  I mentioned the Tail of the Dragon that they had not heard of, so I told them a bit about it.  They wished me luck and I wished them the same as they drove off. 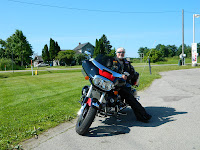 A short while later I saw HillBilly pull into the intersection followed by everyone else.  They all rode into the gas station where I was and filled up.   Then, with the posse complete, we continued to ride north. 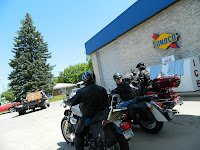 Our objective was a short span of Michigan 119, which was known as the Tunnel of the Trees.  I had heard about this section of road for some time, but I had never thoroughly checked it out or ridden it up to this point.  The ride getting there was awesome.  The day was beautiful and sunny and as we all rolled down the road together, you could feel the good vibes sweeping over us.

At one point as we cruised down the road I took this picture because it occurred to me the difference in riding posture between men and women.  You'll notice the two men that are riding in front of me (HillBilly and Workhard) are both rather hunched over, and on the other hand, GrnEyes is setting up with perfect posture.  I have no idea what the larger social and metaphysical meanings of this are.  I am also unsure if the universe will continue to spin in greased grooves.  It was just one of those things that struck me as I went down the road.

We pulled in for a late lunch at a little roadside diner that seemed to be used to having bikers as clientele.  Over lunch, we caught up with everybody's news and shared a few stories.  I was surprised to learn that GrnEyes had a repertoire that now included forks in the eye as well as punches in the throat.  You never can be sure what talent you are going to find or where. 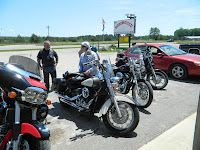 We pushed on and rode through a town I had never even heard of before called Charlevoix.  It was very picturesque and because it was right on the lake's edge, it had great views.  I want to go back there at some point in to spend the day exploring the town.  We were delayed slightly by some traffic there because they had held a marathon that morning but before long we pulled into Petrosky, which is the starting point of the Tunnel of the Trees.

As we entered that stretch of road, my first thought was how green everything was-- the trees were all full and blooming.  There were smatterings of sunlight that was coming through the trees and splashing on the road and us in such a way that it added an unearthly feel to the ride.  The curves were not very challenging but the scenery was more enjoyable because of it.

We stopped at a small village called Good Hart that is midway through the tunnel.  All of us bought the patch for the ride in the general store/post office/bakery/Townhall/police department/insert your own choice here.  The single building seemed to be the all in one of the village and included everything except for a bathroom.  That was located a short walk down the road on the opposite side of the road.
As we pulled out I started to shoot some video of the front of my bike, but I had made a cardinal error – – I had gone on a trip and was using a new untested piece of equipment.  Therefore, a lot of the footage was out of focus because I had failed to toggle the autofocus setting on the camera.  Live and learn.  I was able to salvage some video. 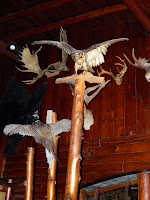 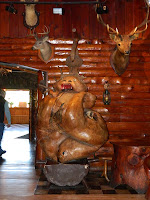 We stopped at Legs Inn and took a quick look inside before mounting up again and heading to Mackinac City.  As we pulled in, Hardwork waved goodbye and turned off the head on to where he was going to spend the night.  The rest of us parked on the main road and then Steve in Red and Gary bid us a farewell and headed on their way.  HillBilly, GrnEyes and I decided to grab a quick snack and a drink before we headed back.

Over dinner at the Pancake Chef, GrnEyes was telling us about her situation with her ex-husband and his psycho girlfriend.  AI related that I heard from many women who were suffering from the same affliction and suggested that she should form a support group called “Ex Wives of Men with Psycho Girlfriends".  We talked about this for a while and then at some point it was decided to T-shirt would be appropriate.  I added that the back should say "Psycho Girlfriend: If You Can Read This You Are in Violation of the Restraining Order".  This actually spurred GrnEyes into action and she started ordering the T-shirt on her phone while we were sitting there.

As I rode home later, it occurred to me that the T-shirt could be made non-gender specific and just has checkboxes that says:  I am the Ex- Husband/Wife (Check one) of a spouse with a psycho Girl/Boy Friend (Check one).  After all, I have heard the ex-spouse with a psycho relationship several times from both sexes.  {I mention this here and now only because if this turns out to be a large moneymaking idea I want a cut.}


After some cherry crepes, piggies in a blanket, and biscuits & gravy (Play the home game: Guess who had what.)  We all bid each other goodbye and mounted up.  As soon as we hit the highway, I headed my bike south and rolled it on leaving both HillBilly and GrnEyes behind – – at that point I had another four hours of riding ahead of me and I wanted to get going.
The ride back was kind of uneventful, but I almost found out how far I could go on a reserve tank because when I was on a desolate stretch of highway 127 my regular tank when dry and I had to switch over and I rode almost another 35 miles on the reserve before I found gas.  The bike was still running when I pulled up to the pump so I know I have at least that far on reserve.

I finally pulled into my garage at 2430.

The actual Tunnel of the Trees part of this ride was almost underwhelming as a ride.  Overall, the full day of riding was totally awesome.  The weather was fantastic and the roads and the company were wonderful.  At some point, when I was riding home the last stretch alone, I did the math and it occurred to me that in one 24-hour period I had ridden 14 hours and gone over 700 miles.  That was a record-setting event for me. 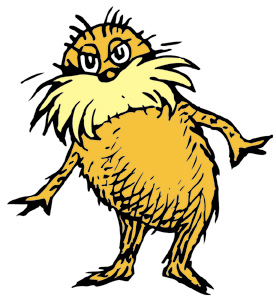 The Lorax may speak for the trees, but we rode them.

Epilogue:
GrnEyes, who does a mean impersonation of the hog from Angry Birds, made our discussion in the Pancake Chef into a reality by actually desgining the T-Shirt.  I have no idea what she is going to do with it,  but if she makes a million I still want a cut.