Be True to Your School

It is probably my nomadic upbringing and adult life that causes me to embrace wherever I happen to be living as my surrogate home.  So, even though I am in an atmosphere and culture that is the polar opposite of anywhere I have ever been before -  I gravitate towards news and accomplishments of Kuwait and feel a contact high in doing so.  The last few weeks have been really good for Kuwait, BTW.

Right now a delegation from Kuwait is meeting with the Olympic Committee to reinstate Kuwait as a full participant in the Olympics and hopefully they will be successful before this summer's London games.  No matter how that turns out,  Kuwait will have its first female Olympic swimmer: Faye Sultan.  Other competitors are:


I am not surprised a the number of competitor here,  there seems to be gun shops and clubs all over the place.


With only one athlete competing ,  who has he been practicing with? 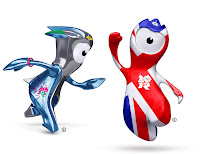 With Kuwait's pearl diving heritage,  I am surprised there are not more swimmers.


If the delegation cannot get Kuwait reinstated, the Kuwaiti athletes will be competing under the Olympic flag.  I will be watching for men and women listed and wishing them well. 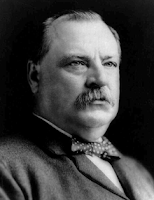 Hollywood Part 1:  The movie Abraham Lincoln Vampire Hunter was premiered to the American sailors on board the USS Abraham Lincoln and to soldiers at a few of the bases in Kuwait before it hit US theaters - the movie's stars even showed up to sign autographs.  I will admit that I saw the movie myself (in Abu Dhabi) and thought the premise was silly but the story wasn't too awful.  I suspend reality when I enter a theater but this took it way too far, I mean everyone knows it was Grover Cleveland who was the Vampire Hunter President.

I missed the festival, but I see dhows tied up along the coast on my way to and from work every day.

Regardless of what P.T. Barnum said, not all publicity is good thing... It was reported that Kuwait is the second fattest country in the world, behind the United States.  Average weight is  approximately 170 pounds, which is 34 lbs heavier than the global average, according to a research report published by BMC Public Health.  I notice that the report also said ""Increasing biomass will have important implications for global resource requirements, including food demand, and the overall ecological footprint of our species."
Giving this a little thought,  I wonder if the increased biomass would be enough to upset the spin balance of the planet.  If that is the case then Kuwait will not be enough to offset the entire United States to keep things spinning correctly.  Perhaps we need more McDonald's and Burger King's throughout the region to keep this humming just right.

FoxNews had a feature about the hottest places in the world, because of the recent heat wave in the US.  Kuwait City was at the top of the list of cities mentioned.  Most of the locales mentioned as the hottest in the world where unoccupied sections of desert and wastelands.  I heard on TV that society seems to be falling apart in some US cities due to 3 or 4 days of over 100° temps.  Sorry, I have no pity - I can't say for sure but I think we have not been under 100° for at least 6 weeks and most days are over 120°.  Rain? Not a chance. 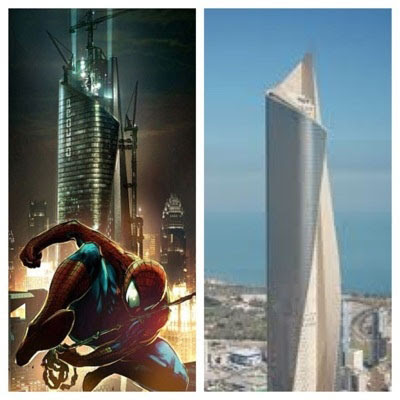 Hollywood Part 2:  (I saw this on 2:48AM )  I am going to see The Amazing Spiderman later today and I will be looking for the building's appearance.  On the right is the Al Hamra Tower which sits in downtown Kuwait City, the building on the left is the Oscorp Tower in the Spiderman movie.  Nothing like seeing bits and pieces of the familiar cast for parts in the movies.

I wonder if the popcorn will come with camel milk butter?