There are many theories on naming animals.  Some people name them after other animals (i.e. Lassie, Rin-Tin-Tin, etc), some people name them after friends or family members, and still more name them after past times or things (i.e. Whiskey, Soccer, Porsche).  I have my own theories which are a bit different than that;  I think animals should be named after their behavior, personas, or appearance.  At the outset I have to admit MacBeth was named before I ever got him.  I liked the name and thought it would be perfect for a dog and I think he has grown into the name.  But my problem right now is with a small Maltese with a tail that wags so hard it wags his body instead of vice versa.

The dog's behavior is unique.  I have never owned a smaller dog,  so a lot of what he does surprises me.    He loves to chase pigeons.  When we go on a walk if he sees a pigeon he gets excited and started to quiver until I drop his leash and let him chase the birds.    The pup also likes to sit on the back of the coach and watch the pigeons on the window ledge when we are inside.  Cats seem to fire up his hunter instinct too.  Now that he has learned they hide under cars, he searches every car we walk past.  He has chased a cat or two across the apartment compound only to have them take off up and over the fence out  of his reach.  He has a squeaky whine that he communicates with when he gets excited and he will stand on his back legs with his arms in the air like a child wanting to be picked up.  So, I could call him Hunter, Chaser, Pigeoneer, or Squeaky based on his behavior. 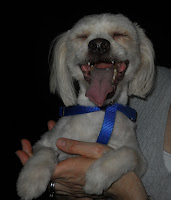 His persona is one of total happiness and playfulness.  He is always in a good mood, ready to play and happy to see me.  The dog likes to snooze in his bed beside my chair and follows me around the apartment when I get up to go do things.  He always wants to go when I go and even waits patiently for me in the gym every night as I work out.  The pup likes to be petted and scratched but does not bite or nip - he will wrestle with my hand and at the end will lick my hand and snuggle against it to take a nap.  The names that came to mind because of this were Shadow, Happy, Smiley, Player,  or Quivers.

With his fur still short due to all the trimming he needed when he was found on the streets,  there is no telling what he may look like later when it all grows out. The hair on his ears is long and his expression is like that of a Retriever in that he usually appears to be smiling.  He is small and skinny and has a curly over the back tail.  His fur is white and eyes dark.  So I could have gone with Smiley, Whitey, Tiny or Hippy.  But he also has an under bite and when you looks at you straight on he brings to mind a movie character from the 1984 German children's film The Never Ending Story - the love dragon Falkor.  Falkor is white and actually looks more dog like than dragon like because he is furry and has floppy ears. 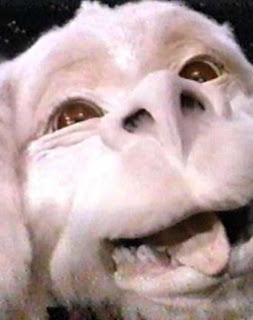 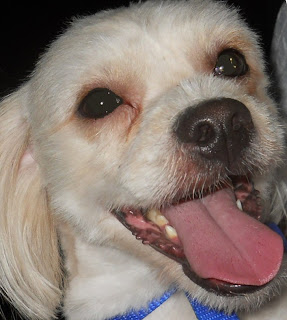