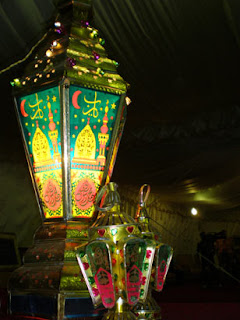 Preface:  I am by no means an expert on Islam and I would never claim to be.  If you want more information about Ramadan or the faith, I suggest you check out Wikipedia and/or the Cutest Blog on the Web -- Expat and the City both of which have plenty of info about Ramadan  -  Expat even uses the words "Y'all" and "Ramadan" in the same sentence.

You will find that there are many interpretations of Ramadan and its restrictions - it is kinda like the differences in viewpoints between Christian faiths in the US.  This entry is about my experiences and perceptions as a Christian living in a Muslim country.

Ramadan started on Friday since it is based on an appearance of specific moon phases the exact start date was "iffy" but it was confirmed when I went to breakfast in town and the restaurant had stood up dividers to keep the dining room out of open view.

You see Ramadan is a time of fasting,  from sun up to sundown.  The fast is broken at sunset and families join together to eat and enjoy fellowship.  Not only does the fast include food and drink, but it also includes things like smoking and chewing gum - as well as having sexual relations during the day. An inside joke among the GIs is that during Ramadan, you get to continue not having sex,  but now you are doing it for legal reasons. You see,  even non-Muslims get to play along because in Kuwait they apply certain restrictions on everyone during Ramadan.


If you are caught eating, drinking, smoking, or chewing gum in public you can be fined (100KD, about $350) and jailed. Sounds drastic; I am not going to push it.  I see it this way:  It is 4PM, the temperature is 120° and you run into a cop who is a smoker.   He has not smoked, eaten or drank anything since sunrise - he is likely to be grumpy and easily ticked off  -- then you cruise by in your car chewing gum.  I learned long ago,  you don't poke pissed off bears.  So, I have made a few adjustments.

Usually, I grab To-Go from the DFAC on my way home and snack on the drive back to my apartment so I can take Falkor out as soon as I get home.  I can't eat in my car now so I put my To-Go container on the back seat to avoid temptation.  Dogs are considered unclean by Muslims so they have to avoid any contact during Ramadan to remain pure, so Falkor and I do not walk past the neighborhood Mosque on our outings to avoid any accidental contact with anyone coming or going.

What I had wondered about prior to getting here was how does work that goes on outside continue?  It is just not healthy for a person to be working outside in that heat without water for any length of time.  Well,  they have a fix for that - they adjust their day.  Many work in the morning and then take a break until after the sun goes down and then resume their activity.  Others just become nocturnal, working only after sundown. 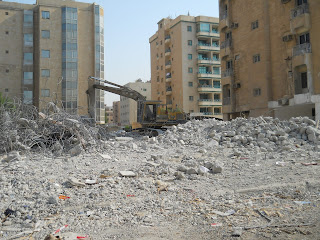 In my neighborhood, they are tearing down an eight-story apartment building,  I am amazed at how quickly it is going considering they are doing a lot of it manually.  They have been at it for about a week and I have been watching their progress when I come home from work and take Falkor for a walk.  Due to Ramadan, at midnight last night, the crew started their workday and I was treated to the sounds of backhoes, shovels and the clanging of broken cement being thrown into a dump truck for the rest of the night.  I may sleep in my living room (opposite side of the building)  until they get done or Ramadan ends.


I am taking the opportunity to learn about the traditions of Ramadan, Iftar and eventually Eid.  By learning about other cultures you enrich your own life.  All told, it seems to me that the basis of Ramadan is very similar to that of Lent.  The self-denial is supposed to get you to consider those things outside of yourself and to reflect on those unfortunates who have to deal with sacrifice as part of their daily life.  It is a cleansing of your mind and heart.  At the end of Ramadan, the faithful believe that their sins have been forgiven and they are reborn.  Sounds familiar, huh?  BTW please do not send my theological arguments about how they are different - I am thinking about a broader sense of what they are to compare them.

It would be easy to ignore the fact the Islam, like Christianity and Judaism has many different interpretations and inconsistencies then try to paint all Muslims with the same brush.  If I have learned nothing else in the months that I have spent here so far it is that each individual's faith guides them and makes them who they are - not their religion.

Life is full of wonders,  take the fork in the road and go find them. 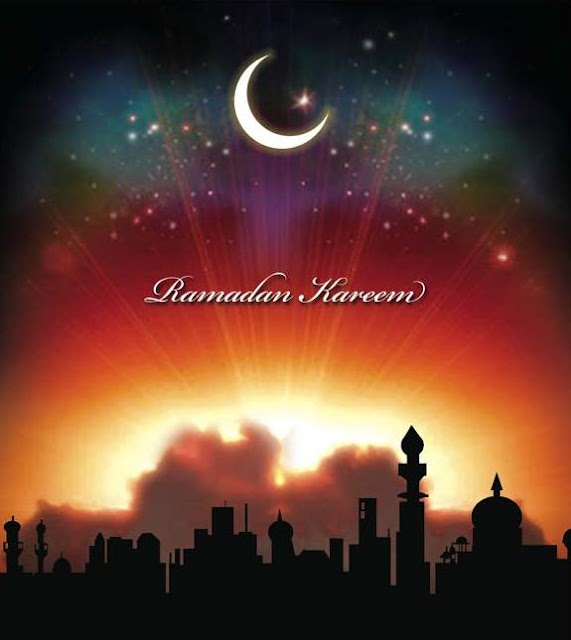 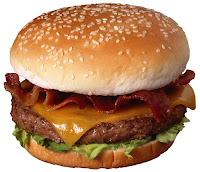 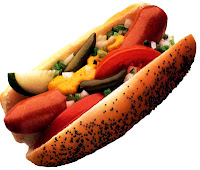 Bonus "Things that make you go 'Hmm'" Section:  Before Vatican II, if you ate meat on Friday it was a sin and you would go to Hell,  after Vatican II it was okay.  Does that mean there are Catholics in Hell for eating a hotdog on a Friday before Vatican II or did they get an early release?  How can an Orthodox Jew and a Jew who has just eaten a bacon double cheeseburger claim to follow the same Talmud? Also, since in Judaism, there is no Hell; is there a penalty for the Cheeseburger anyway?