One evening we went for a brewery tour at the Griesbrau brewery in nearby Murnau I had seen large American breweries before, like Anheuser-Busch in Williamsburg Virginia, but I've never seen a smaller German brewery.  Our tour guide' s name was "Not Wolfgang".  We were originally supposed to be given the tour by Wolfgang but this gentleman replaced him and for whatever reason I failed to get his name. Therefore, for the purpose of this blog I will have to refer to him as Not Wolfgang. We were first taught about the German Purity Laws (beer is very serious business in Germany) and then Not Wolfgang moved on to how beer was actually made. Along the way we sampled various product that was being produced by the brewery. 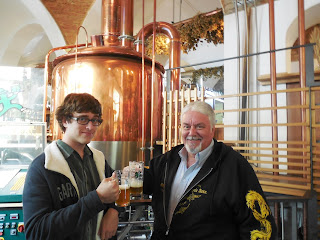 One product that we did not get, was the recently released "Dragon's Blood" which based on the name everybody wanted to try.  We also got to sample the beer liqueur that they are known for around the region. I had drunk several shots of the liqueur previously, but this time I was drinking and at the source. It is served warm to hot with whipped cream on top. Tasty.  Once the tour was complete Not Wolfgang  gave us a test on what we had learned. It did not take too long for it to become a group effort and several people used their translation skills to pull the answers off of the menus that were on the table. Luckily, everyone passed and Not Wolfgang handed out  diplomas. 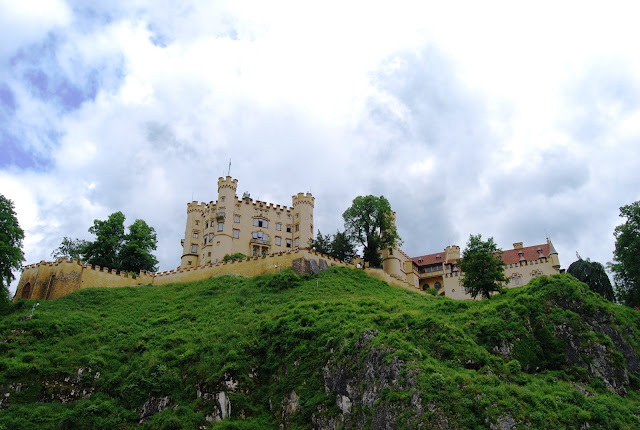 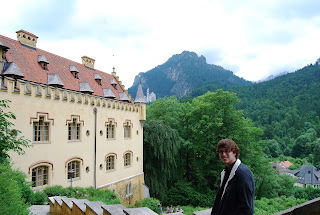 I always wanted to go into the cream colored castle across from Neuschwanstein but when we had visited the area, it was not open to the public. This time, things had changed. The castle, Hohenschwangau, had previously been lived in by the family that owned it. Between my last visit in 2006 and now, the family had moved out and turned it into a tourist attraction. I'm so glad that they did.
I cannot show pictures from the inside of the castle, because they won't allow you to take them -- although I did find a few on the web that are shared here. However, the most unique thing about this castle is that the artwork that was produced for the castle was not hung on the wall or painted onto canvases that were pasted the wall.  Instead the scenes were actually painted onto the walls with the original paintings being tucked away for safekeeping.  Also, a majority of the paintings were not of the royals themselves but of scenes from various historical events and German legends. The walls in all of the rooms were covered in Renaissance style storyboards which could be appreciated for hours rather than just the few moments that we were given to enjoy them.
﻿﻿﻿﻿﻿﻿ 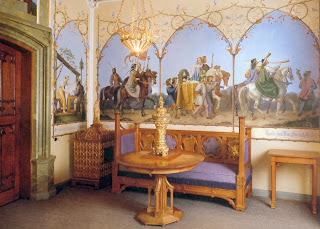 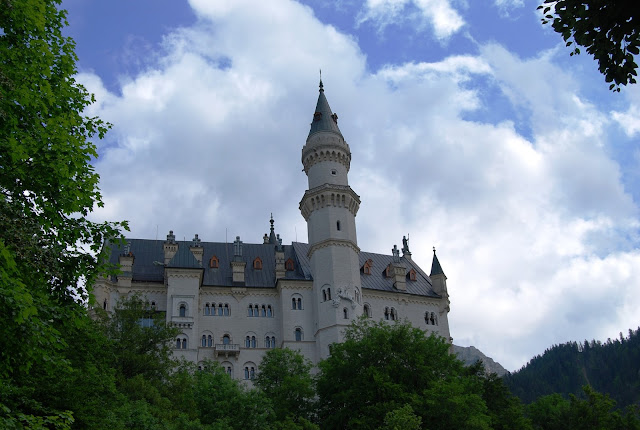 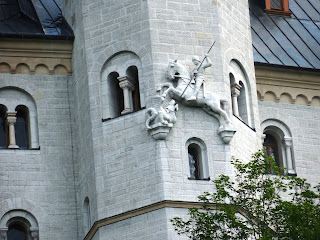 After touring Hohenschwangau we walked across the street and boarded a horse drawn carriage for a ride up to Neuschwanstein.  If you have seen the Disney castle, this was the model for it, although no one will admit it due to copyright rules.  No pictures from the inside of this place either, but you would be impressed.  Ludwig's bedroom alone took 14 woodcarvers 4 years to complete.


I was able to find a few pictures of some rooms on the web.

Bavaria has always been my favorite place to go in winter. The skiing is terrific and there are so many other winter sports available in the area it is feast of activity. During my final year of being stationed in Germany, my son and I went skiing near the peak of the Zugspitze, the tallest mountain in Germany; but this time we were here in summer. 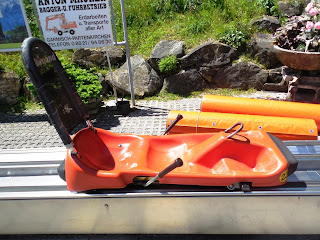 The Bavarian's are very inventive people and during the summer they convert bobsled runs into rottelbahn runs.  Basically, you remove the ice and snow and replace the bobsled with a modified cart that has wheels on it. Voila! Summertime ride.  This footage was shot by my son has he rode the SommerRottelBahn track in Garmisch.  Occasionally, in the background you will get a glimpse of the ski jump that was used in the Olympics in 1938, as well as yearly for the International Ski Jump Championship.

Pix I took while getting from here to there...

I thought I was going to be able to finish the tale of the trip this week,  but I still have more tale and don't want to bore.  So,  next week Part III: Die Fleidermaus Fliegen Noch Einmal