Strolling Through a Thick Fog In Search of Seat 11C 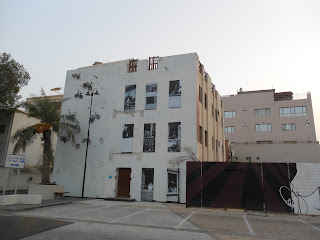 Once again I found myself traveling to Bahrain on business. I have come to the realization that when I am in the Middle East during Ramadan for at least some part of it I have been in Bahrain. There's nothing special that goes on in Bahrain during Ramadan that is different than any other place in the Arab world but for some reason I always wind up on that island during that particular month if I happen to be in the area. Such is life. 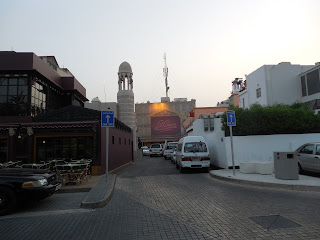 The trip was short and basically uneventful, my host took me to section of town that I had not been to before. If the temperatures (112°) and humidity (54%) were lower, I would've sworn that I was in Europe. This building in particular, used to style that I have seen in Italy. They cover a very plain solid wall with paintings to make it look like there are windows in the building. We ate at the La Cucina one evening, to me the name was Mexican sounding but it turned out to be a very excellent Italian restaurant. When I first walked down the alley to get to the restaurant, I could've sworn that the tower on the left was meant to be a homage . To the famous tower in Pisa – – when in fact, it is a mosque. 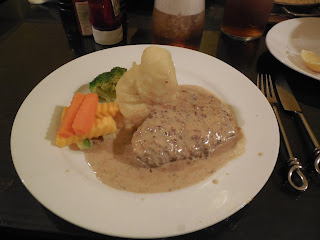 In keeping with the Internet trend of taking pictures of your food I give you a picture of the Pepper Steak that I had at Coco's. It was excellent.

Because of the serious humidity and heat in Bahrain when I boarded the plane to leave, I encountered a thick fog inside the plane. The airline was trying desperately to keep the plane cool and comfortable and as a result this fight over environmental control caused thick condensation to float in the air throughout the aircraft. It was kind of spooky.

The taxis from the airport, are only driven by Kuwaitis. So, when I come back I can usually look forward to a brief conversation with a native. This time was no different as he quickly got me from the airport to my home. The fares are all predetermined based on the destination and are displayed on the window in both English and Arabic. As I prepared to exit the cab, the driver quoted a fare that was twice what I knew the rate to be. When I pointed to the rate chart that was clearly displayed he acted like he had forgotten that such rates existed and apologized for his mistake. I handed him the exact fare, choosing not to tip because you try to rip me off. That was the first time in all my dealings with Kuwaitis that I have ever had one try to do something under the table like that.

Finally, I got another haircut (where does the year go?) and opted for something a little more Tony Starkish on the goatee.  Not sure how long it will last because it requires a lot of work to keep it trimmed properly, easy for him since he has Pepper and Jarvis to lend a hand. 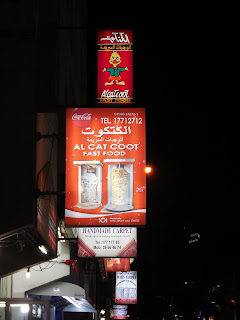 This sign caught my eye. They display the picture of a Duck, for a place that has Cat and Coot (a cranelike bird) in the name, which is selling shwarmas, a type of Middle Eastern sandwich that is usually made of chicken or lamb.   I'm confused. 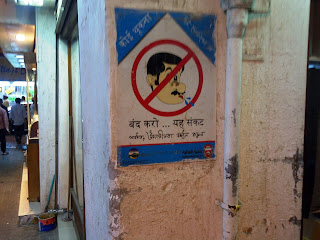 Notice that the man pictured in the sign is not wearing a gutra (Arabic head dress), that is because the sign is specifically aimed at Indians and Pakistanis who live and spit in the area.