It Is Nice To Be Missed, But It Is Even Nicer To Be Loved 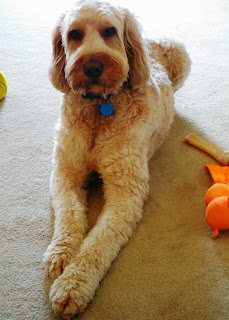 I was worried MacBeth might not even recognize me since it had been a year since I had seen him.  When I went to pick up MacBeth from the kennel,  they already had him ready to go. He was in an office that had one of those half door things,  where you can open the top half to greet customers without opening the bottom.  When they opened the top part he looked up and saw me then without waiting for anything else he ran toward the door and jumped through the opening to greet me.  That was a wonderful Welcome Home. 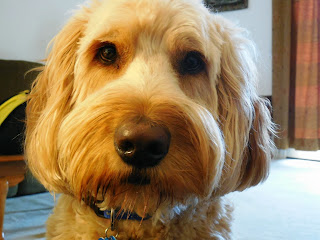 At some random point every day he will bring me a toy to play fetch or tug. I also take him outside daily and throw the ball over the house for MacBeth to go find and bring back.  Of course there are treats involved and that gets him really excited.  He also spent a bit of time lying or sitting next to my chair,  so I could scratch behind his ears and rub his belly.

I leave to go back to Kuwait in a few days, and I really wish I could tell him that I will be back much more quickly this time and that I won’t have to leave again.  I have a feeling it is hard on MacBeth  when I disappear but at least I know when I get back he is happy about it.