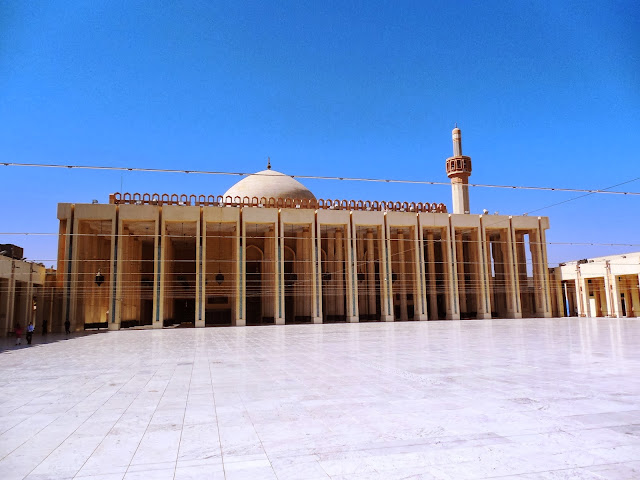 
The Grand Mosque of Kuwait is the seventh largest mosque in the world, at least at the time of my tour. The original construction was completed 1986; however, it underwent extensive renovation in the last year because some cracks were found in the foundation and that is also why I had not toured it until now.  The renovation fixed those cracks, and a redesigned ceiling was installed at the same time.

The Mosque can handle up to 10,000 worshipers in the main hall and many more in the women's prayer hall and main courtyard. The largest crowd ever gathered was 100,000 people during Ramadan. Looking at the exterior design of the Mosque, there is only one dome, one minaret, and it is sand colored, it is one of the plainest mosques from the outside I've ever seen.  I understand that the number of domes and minarets is irrelevant to the importance of the mosque but having seen the Grand Mosques of both Abu Dhabi and Bahrain I was surprised at how simple the Kuwait Grand Mosque was.

The exterior courtyard is Italian marble and features no patterns or anything that stands out in a grandiose way. Those lines that are going across above the courtyard are a water misting system used to keep worshipers cool during the hotter months. I will say that at this point in the tour I was getting disappointed because I was hoping for something more unique and beautiful from the Mosque. Then we entered the inside of the main prayer hall and the true beauty of the building shown.

The tour was being given by the AWARE (Advocates for Western Arab Relations) Center and led by Iman, a British woman who has been living in Kuwait for the last 24 years...and now a word from our non-sponsor...

The folks at the AWARE Center have done more to help me understand both Kuwaiti culture and the traditions of Islam than any other single source during my entire stay in Kuwait. If you are looking for a way to learn about Arab culture they are the "go to" people; I have found them open, friendly, and very tolerant of what some might call silly questions but what they see as a quest for knowledge and truth. Later this month, I will be going on what will probably be my final two events at the AWARE Center:  the Eid Al-Adha Festival and Bait Al-Othman Museum Tour (if I can get a reservation).  If you are ever in Kuwait and want to learn about Kuwaiti culture the AWARE Center is the place to go...now back to our show… 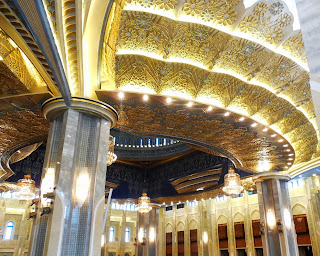 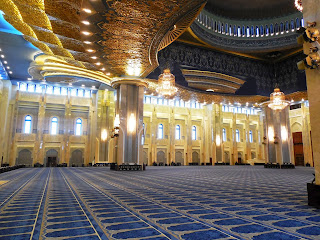 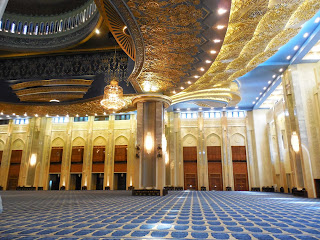 For my entire life, I have been a fan of deep colors. It may be because I have a color vision deficiency or it may be that I see deeper colors as being bolder and decisive -- I don't know -- but upon entering the main prayer hall and seeing the deep cobalt blue used there the effect was profound. The two main colors used in the prayer hall are deep blue and beige which is meant to be symbolic of the two elements that make up Kuwait: the sea and the desert.  Additionally, the use of gold accents brought together the entire feel of the building most wonderfully. 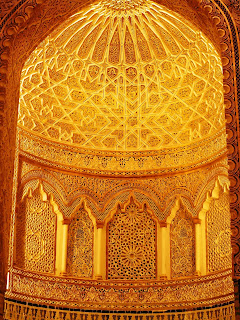 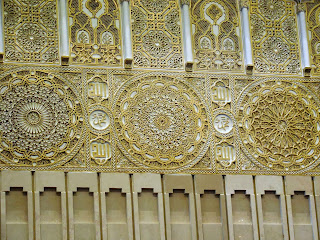 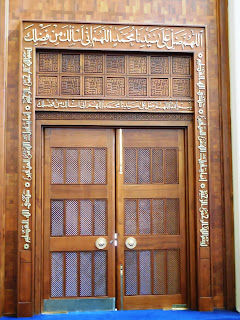 Throughout the hall are many detailed carvings and displays of calligraphy. Unlike many Christian churches, mosques do not have paintings or statues representative of important people in their faith -- as a result, words from the Koran are used as ornamentation for the building. The carpeting, by the way, uses a pattern to help worshipers know where to line up so that they can fit 10,000 people into the hall with little hassle or fanfare. Notice that there are no chairs or other places to sit in the hall for the public, as everyone sits on the floor together because all are equal. 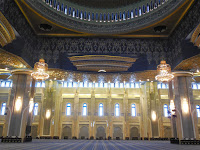 The dome at the center of the prayer hall is the hall's most fascinating architectural feature. The four columns supporting the roof are actually outside of the dome and not supporting the weight directly. Not sure how you do that but apparently it works; I guess the Iraqi who designed the Mosque was a really good engineer who knew how to defy gravity. Around the center of the dome are the 99 different Arab names for God. The most commonly used name is Allah, as it has no other meaning, but there are many other descriptive names that are used within Islam, i.e. the Redeemer, the Merciful, etc. This is similar to Judaism, and in some ways Christianity, although these descriptors are normally not seen as different names. 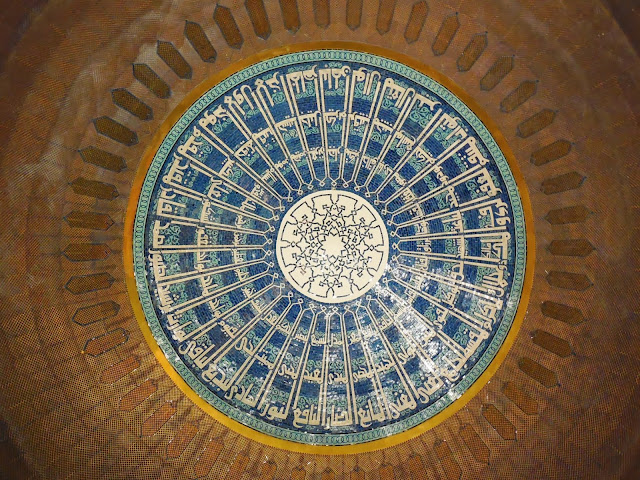 Once we had looked around the prayer hall, we all sat and Iman spent quite a bit of time answering basic questions about Islam and the Mosque -- she did a great job.

In Kuwait, women are not required to wear any particular clothing – – it is left up to the woman to wear what she feels is appropriate for her and her faith. Based on that, Iman talked briefly about how she felt that the Abaya and head scarf were actually empowering and not limiting. I've never heard it expressed quite the way she did and Iman made a very valid argument; but I would counter with one thing: This is only valid if the woman has a choice as to whether she can or cannot chose what to wear. When that choice is taken away so is any empowerment or freedom that a woman might derive from choosing what she wants to reveal and to who.  Then the Abaya becomes its own prison. By the way, this type of limit to personal freedom is not exclusive to some forms of Islam; the same sort freedom taking exists in every faith. Free will is the ultimate gift that God has given us – – no human should feel that they could take that away from another. 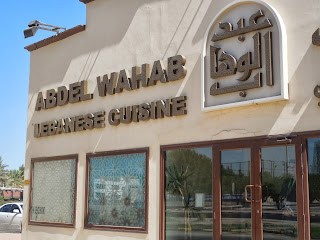 After the tour, I went with a couple of folks and we had lunch at my favorite Lebanese restaurant, Abdel Wahab, in all of Kuwait. This place is awesome: the food is excellent and the views of the Persian Gulf are beautiful.

Progress on my Kuwait Bucket List seems to be going very well, as I have good leads on a couple of the items that are left thanks to some friendly Kuwaitis who read my blog and are very willing to share their culture with me. Thank you to them.  This week I need to go dishadasha shopping.

Items still in the Bucket:

* Go to the Friday Market.  Waiting to go with a friend who speaks Arabic in case some bargaining is needed.

* See the inside of a real Kuwaiti home.  I live in a Kuwaiti house, but it is an American home – I would be glad to swap tours.

With 44 days left, I might just fit them all in.