There's a Hole in Me Bucket 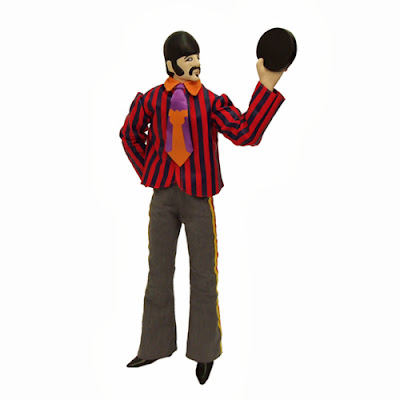 When I first put together my Kuwait Bucket List, I thought that it would either be a Go or No-Go for each of the items on it.  However, I've come to realize that there are going to be varying shades of gray with getting each of the items done. So, I accept that and move along trying to finish the list as best I can.

See the inside of the Holy Family Cathedral in Kuwait City. 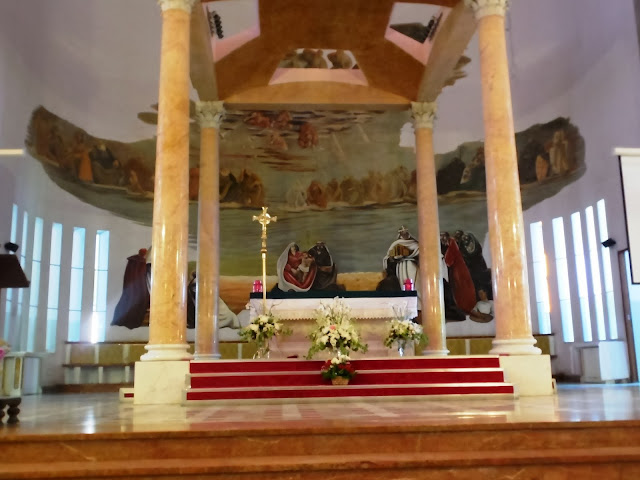 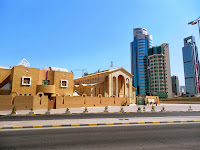 The Cathedral has been there since 1966 when the ground was given to the Catholic Church by the Emir. I discovered the the church by accident when I drove past it with my son during his visit on his way home from Afghanistan. Living and traveling in a primarily Muslim region for the last 18 months, I was almost in shock when I saw a building with a cross on it. I made myself a promise that I would go back and actually see the inside of the Cathedral and today I did just that. 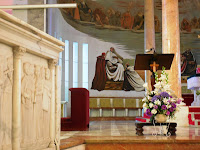 Having seen many cathedrals in Europe, I can tell you this was like none of those. There were no over-the-top ornamentals like in the Baroque churches that are in Germany and Austria.   The church itself has a simple beauty to it. Behind the altar is a large mural. At first glance I thought that some of the figures in the mural were Templar Knights – – which would've been quite surprising – – however, the interpretation given on the Cathedral's website is different. 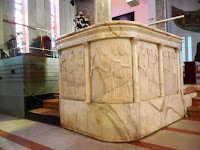 I did not take a formal tour, but simply walked around the church and observed the sculpture and artistry of the building itself. The most amazing thing is that the building exists at all on the Arabian Peninsula. 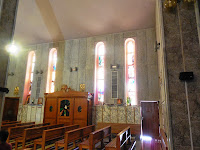 Kuwait, by its Constitution, has freedom of religion. Several Arab countries claim that, but Kuwait is one of the few that I'm aware of that actually have Christian churches openly operating within their borders. Of course, there are rules regarding missionary work, but they are not as extensive or severe as those in other countries within the Arab world. This is one of the several things that I've discovered during my tour here for which I applaud Kuwait. I think the drafters of their Constitution were very farsighted in seeing the need to guarantee freedom and liberty for their citizens to include their spirituality.

See the oil fields that were set ablaze by the Iraqis at the end of Desert Storm. 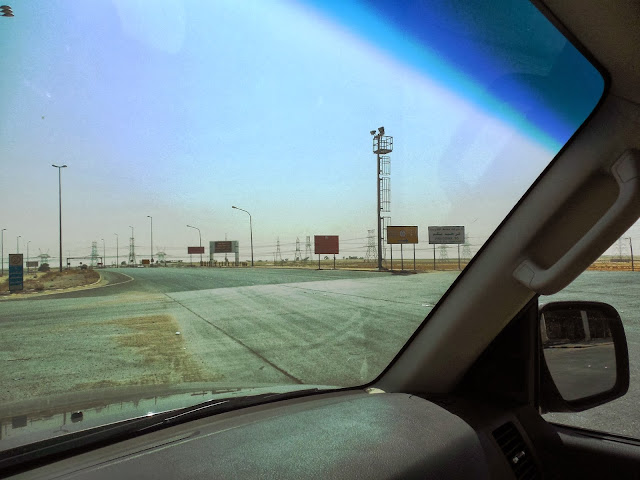 After doing a lot of research online I found out that the place where a majority of these oil fields were was the Burgan Oil Field. Armed with that information, I was able to find a picture of it on Google Earth then using that I was able to get the map coordinates and figure out where it was. There are probably people who could've told me outright how to get there, but doing the research is part of the fun. 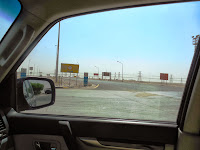 So, armed with my trusty sidekick and partner in crime Falkor, I went out to the oilfield yesterday and was abruptly turned away. The main highway that cuts through the oilfield was closed by the military. If you think about it, it makes perfect sense. This was a target for the Iraqis because it hurt the nation of Kuwait as a whole. I cannot fault them for wanting to protect it. However, that was not how I was going to get this item done and I looked at other ways to be able to get my looking at the oilfield some 20 years after Desert Storm.

Today, I went back to the oilfield again and this time armed with someone who had access, instead of Falkor, I was able to travel down that highway -- as long as I agreed not to take any pictures while on the road.
Here is what I noticed, keeping in mind that I know nothing at all about oil drilling and all of my environmental impact knowledge was gained as a Boy Scout: There were several expanses of desert where trees and shrubs had been planted at throughout the oilfield. Nature has a tendency to take care of man's impact, and planting this bit of flora and fauna was a way to boost it along. I had read many things about large standing pools of oil, which had turned to solid and that had started working its way into the groundwater. I saw no physical evidence of that. I did see what appeared to be charred rings on the ground at the base of the oil wells that I saw. However, this could also be spillage that is normal during maintenance of an oil well.

I guess my biggest satisfaction was that it did look like it had been cleaned up. Those massive lakes of dirty oil and debris that were visible in the photos after the fires had been put out were gone. The desert seems to have healed itself rather well.

Take a ride on a Dhow 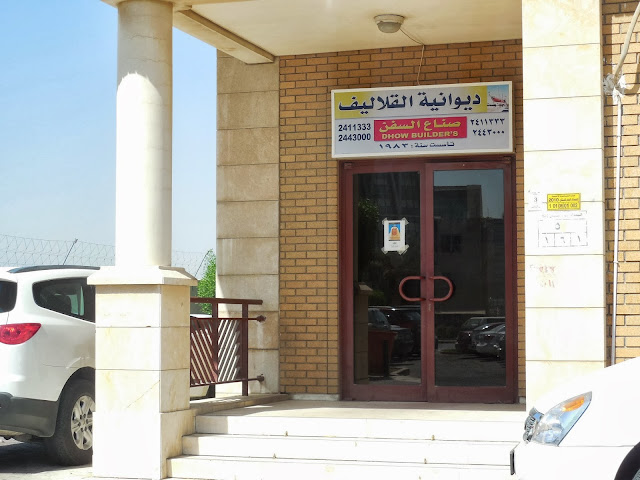 I did not even attempt to get my Dhow ride in today, but as I passed by Souk Sharq I saw all of the Dhows on the water and the miniature one out in front of this building – – which turned out to be a Dhow builder. Another time I will come back and see how I can get myself a ride or at least a tour on one of these. 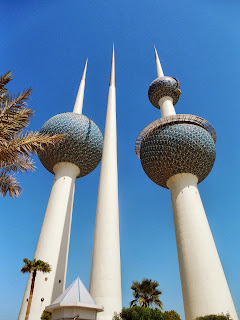 Alas, this item will not be done – – at least not during this tour. I went by there today because I could find no information on line other than it was supposed to be open in October 2013. I talked to the same gentleman at the gate that I had spoken to several other times when I've gone by there to attempt to take the tour of the towers. I was informed it will be another year before it's open. Another year-- I am not hanging around for that. When I pointed out that there had been several other delays during the past 18 months in question why there was a delay this time he told me in two words: "Arab Construction". 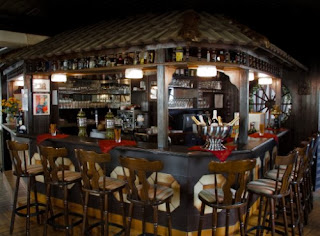 While in Europe, my favorite restaurant was Die Ziegelhuette. Their specialty was Argentinian steaks served raw on top of a lava rock that had been heated to 400°. Part of the dining experience was to actually cook your own meat at the table. They accompanied this with a special homemade Herb butter that was out of this world.

Having been without one of these steaks for going on seven years, I was delighted that a restaurant was opening near where I live in Mangaf promising that same unique dining experience. So, last night I went and had dinner at the Stone Grill. 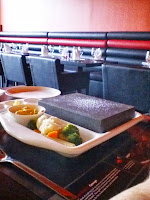 The Stone Grill is slightly more upscale than the Ziegelhuette, but I decided to eat there anyway. I had the filet mignon accompanied by a Greek salad. While it was not exactly the same, it did bring back fond memories and serves as a viable surrogate. 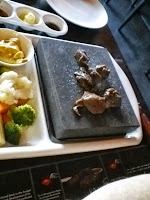 There were a few things that were different, for one at the Stone Grill they put a small apron on you prior to bringing out your meal to prevent from getting anything on your clothes. The plate that holds the lava rock also holds your vegetables so the meal is less spread out and easier to eat. They do not serve that awesome Herb butter here, but they do serve several sauces that were not available in Germany to include Dijon mustard and American-style barbecue.  You can also order chicken or prawns to go with your steak which is also nice. One thing I particularly liked was getting a hot towel at the end of the meal so that you could wipe your hands off. 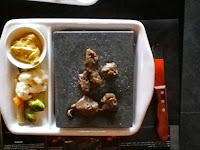 The steak did not taste as flavorful as Argentinian beef, and with no other guidance I would probably guess that they were serving Australian steak. Overall, the meal was enjoyable and I will probably return there before I leave country.

If only they served spargel -- with a nice Hollandaise sauce.   Mmmm spargel…..

It is a pity that this type of restaurant will never exist in the United States for two major reasons:  Nanny state food safety rules would prevent a patron from being given a raw piece of meat;  Secondly, giving someone a lava rock heated to 400° requires that you give it to an adult who will not later try to claim that they felt the need to pick it up with their bare hands because they were not sure how hot 400° was and there was no warning label on the rock. The lawsuit would be in the millions, kinda like the one for McDonald’s coffee. In general, negligence lawsuits hurt the public rather than helping people--except for lawyers.  Pity.

Photos Of The Week