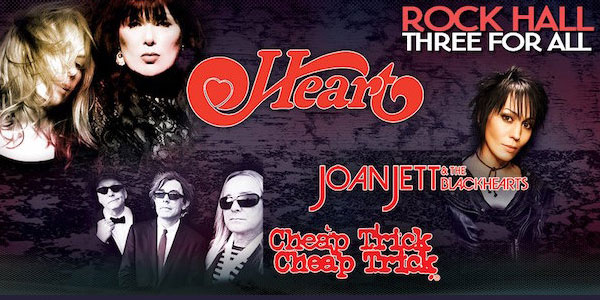 This was the start of it all and the tickets I bought first.  Three acts that were big in the 70s and 80s, all Rock & Roll Hall of Famers, touring and performing together.  I had even lobbied for two of the acts to get into the RRHoF.  Joan Jett was the ticket I wanted, but what an opportunity!  I jumped on the tickets, buying VIP Tour seats in the Cheap Trick section  of the audience.  Not a huge Cheap Trick fan, but they were the only VIP seats left when I got online.    Heart mentioned that this was the first performance of the Rock Hall Three for All.  Cool.

Upon arriving and after finding the seats, the guy next to me leaned over and asked who I was here to see.  My response was Cheap Trick -- you got to be faithful to your seating section after all -- apparently that was good enough for him and he shook my hand and started yelling "Cheap Trick! Cheap Trick!"  I joined in for a few shout outs and then let it fade -- waiting for the show to begin. 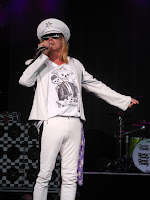 The Live at Budokan album was seminal to me because it was one of 3 Live albums that came out and lived in my tape player for months afterwards -- the other two being Frampton Comes Alive and Kiss Alive II.   I knew the songs I wanted to hear, and was eager to hear them play.  Kevin Zander came out dressed in a mixed military/80s glitz white leather outfit and Rick Nielsen was in a normal suit and baseball camp -- although Rick's part of the stage was covered in the expected black and white checkers.  Tom Petersson was less dynamic, except for a solo late in the show

, but his rhythm guitar under penned the whole performance.  Daxx Nielsen was on drums and kept the driving beat going.

Zander's voice was on target and even though he was not very physically animated, you could tell he was getting the energy of the crowd and he was striving for and delivered a great vocal performance.  Rick on the other hand was all over the sage, on top of amps, swapping guitars (once even in mid son 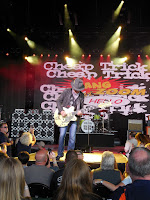 g) and throwing dozens of guitar picks to the appreciative audience.    As mentioned, Tom played a bluesy instrumental solo that I had never heard before but really enjoyed as he built it from something very delicate to a thunderous rocker.

Surrender, Dream Police and I Want You to Want Me did not disappoint -- although the lack of an encore to a clamoring crowd did.    I realize that there were timing marks to be met -- but damn it this is Rock & Roll!

Cheap Trick left the audience ready for what Joan Jett was about to bring. 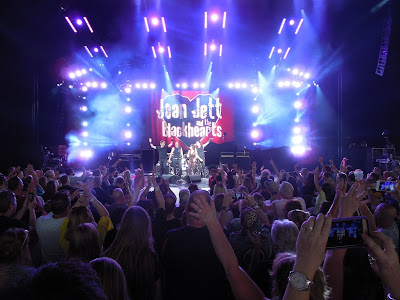 Heavy guitars, driving bass, and a snarl.  What a way to hit the stage.  Joan was fired up and delivering music in her style and having a great time doing it.  She and the band connected with the vibe established by Cheap Trick and kept it fired up.  Things may have calmed a little as roadies switched out equipment but then Joan et al took the hum that was left and turned it into a roar.

She played tunes going back to her time with the Runaways.  It was not done in a retrospective chronological format but someone seemed to have taken the time to construct a set that was connected and flowed.  She and the Blackhearts also threw in two tunes off her latest album (2013's Unvarnished) that fit right in with the rest of her set.  It was visible that she was having a great night and the band as well.  She played to the crowd and was rewarded with cheers and applause.  The band was totally rockin' it and they knew it -- it is what a concert experience was meant to be. 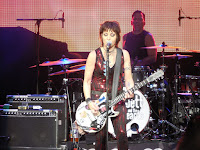 Joan had built up the crowd and fanned the flames that were growing -- then she doused it with gas as the band hit the unforgettable guitar riff that starts I Love Rock & Roll.  Everyone was on their feet and cheering. 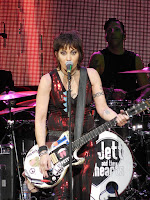 The band went straight from that classic to Crimson & Clover -- my personal favorite.  I was sitting almost directly in front of Joan -- four rows out.  As she sang the line "I want to do everything" -- she looked straight at me, smiled, licked her lips, tilted her head, winked, and then breathlessly sang "What a beautiful feeling".  Dayum.   To anyone who wants to argue that Joan and I did not share a moment -- please take that rhetoric elsewhere.  Joan was connecting with me -- after all these years -- she and I both knew and enjoyed it. 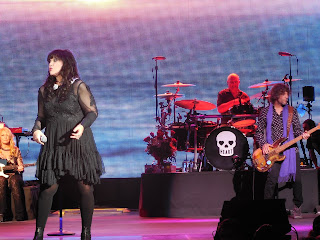 I have often said that going to a concert carries with it the expectation that you will have a good time and the artist will deliver the expected performance.  If you read my past write ups you have probably come to expect me to likewise deliver a positive review and you would be hard pressed to say you have ever read a negative review authored by me.  Well, page mark this one and I will add that I am a fan of this band.

Heart disappointed.  They failed on so many levels and it was not the headline experience I was expecting nor that the audience deserved.

The sound mixing was horrible.  Ann Wilson's voice was drowned out by the rest of the band.  She was on 5, they were on 11.  As a result, her usually magnificently strong voice was totally buried in the music.  Midway through the set some adjustments were made, but not enough and the damage had been done.  The chance for the audience to become immersed and escape into the music was gone. 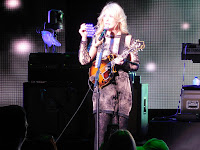 The huge background video screen was a mistake.  The pictures displayed seldom went with the song being sung, and the screen's brightness made it hard to see the band standing in front of it.  It was just a distraction that added nothing.  Get rid of it.

Nancy Wilsons' playing and vocals were great, but she didn't seem to be there.  The performance was almost robotic and disconnected.  You can tell when a performer is connecting with the audience and that symbiotic exchange of energy is going on -- but it was totally lacking.  However, she does play a wicked mandolin and provided great vocals on the Led Zeppelin and Ne-Yo cover. 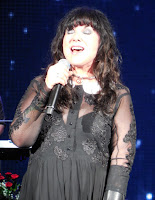 I wondered during the entire set, what was wrong with Ann Wilson.  She dropped notes and did not hold the sustained pitches as she did in the past.  She seemed to be out of breath -- allergies?  A cold? Not in shape?  Her face showed that she knew it too.  She would bite the end of the note that should have been sustained early and then gave a look disgust seemed to be out of personal frustration for a moment before going to the next lyric.  One of my favorite tunes that Heart did not perform was Magic Man -- but it requires her voice to sustain those notes to come off right.  Maybe she cut the tune because her voice could not handle it; I have no way of knowing.  Disappointing even if given the benefit of imagined reasons. 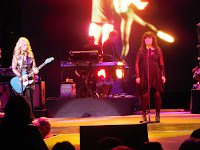 The audience did not need the "We are the inspirational woman led band" speech.  Most of the crowd were my peers and knew Heart's history.  Ann and Nancy Wilson may have blazed a trail, but that was almost 4 decades ago -- at least two generations of female rockers have come and gone since then and Heart may have inspired some of it -- but it is no longer unique.  Agreed that Ann & Nancy did inspire and led the way but that is part of a Rock Hall induction speech, not a distracting and flow interrupting speech for the middle of a concert.

The songs off the new album, Beautiful Broken, were okay but are a significant departure from their past style -- at least musically if not lyrically.  Just did not fit in with the rest of the set they were playing.  I realize it was a promotional decision -- but that does not make it right.

A bad way to end an otherwise winner evening.

Note: Gave Beautiful Broken a listen separately.  It is a good album but a departure for Heart as there is less driving guitar and more keyboards, strings and sitar (yes, sitar).