My Musik Trifecta at Kalamazoo State Theatre – Part I: The Temptations with The Soul Experience 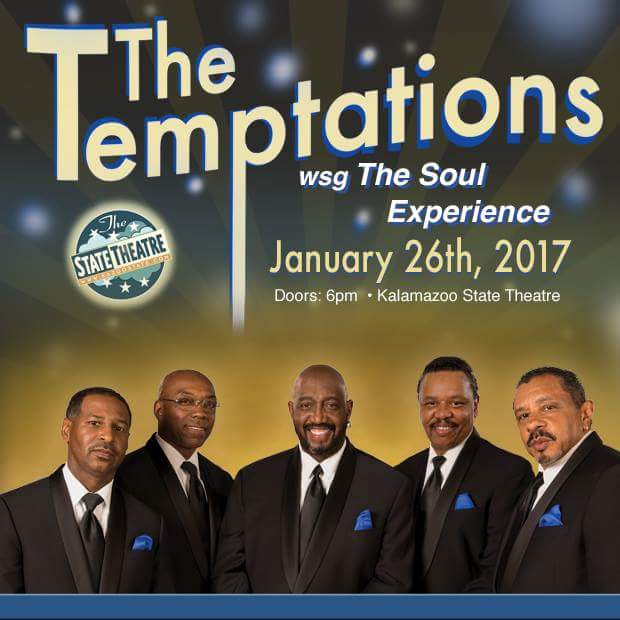 It wasn't anything formal that Kalamazoo State Theatre did, I just ended up with concert tickets for three performances over three consecutive nights.  They are booking some great acts this year! 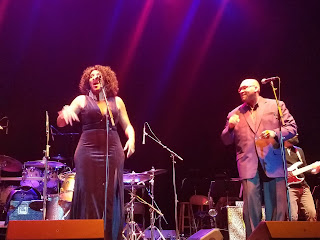 
Good opening act, played a set of what I knew as soul music growing up.  Both vocalists had strong voices and connected well with the audience.  Very enjoyable, but I regrettably missed part of the performance when I went to the Meet & Greet.


The Temptations have been a part of my musical life since birth.  Most of their biggest hits that are my personal favorites were released before I was 10; yet those songs still have a massive audience.  They are one of the few groups that I consider to be Legends.  Getting to see them live was a gift to me that I will always be thankful for.

First, I saw the band as they are today.  It would be unfair to compare who I saw with the Temptations that included David Ruffin or Eddie Kendricks (like comparing Journey today to the Journey with Steve Perry).  The lineup I saw did include Otis Williams who is the only original Temptation still in the band; he was singing tenor for the group since they were The Elgins.  The rest of the lineup was Ron Tyson (tenor/falsetto), Terry Weeks (tenor), Larry Braggs (lead vocals – used to be with Tower of Power) and Willie Green (bass)

I did get to meet the group prior to the performance and I was able to get a rushed photo and autographs.  Since I was the last to leave the Meet & Greet room, I had a chance to talk with them as they walked to the stage.  Overall, they were personable and joked around.  It was my first Meet & Greet ever, but these guys are legends so it was worth it.  One note to promoters & venues:  If you delay the start of the Meet & Greet, you need to expect a slight delay in the show starting – simple solution: start on time.  Also, when doing a Meet & Greet be fair to everyone.  Since I was towards the end of the line, a lot of the available time was gone due to the folks at the front of the line taking more time.  As a result something I paid extra for was just a blur.

The performance was spot on.  The vocals, music, choreography, and audience connect were on par with what you would expect for a group of this caliber and history.  They did not hold anything back and Larry Braggs was awesome to watch and hear as was Ron Tyson.  They all worked well off of each other and showed what polished showmen can do with a stage.

I heard every song I wanted to hear from them including Ain't Too Proud To Beg, Treat Her Like a Lady and what they called the Temptation’s anthem:  My Girl.  I will admit to not only singing along, but also doing the hand gestures along with the group.  If you get a chance to see them  -- do. 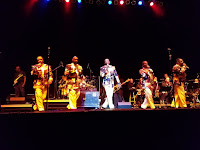 A comment on their matching outfits.  I do not know if it was special material or what, but when one of them started a solo and the spot light hit them and their outfit, the rest of the band seemed to fade into the background like their clothes were a different color.  Even though I was in the front row, it added depth to the stage and made the performance more intimate.

Post Script:  On the way out, a black gentleman who had been sitting next to me during the show told me that his wife looked around at the crowd during the concert and said “Look at these folks all enjoying the show.  We could get rid of a lot of race issues if we would all just listen to more music.”  I smiled and nodded – that thought was spot on.  Music is a wonderful thing that everyone can share together, it does tear down walls and brings peace.