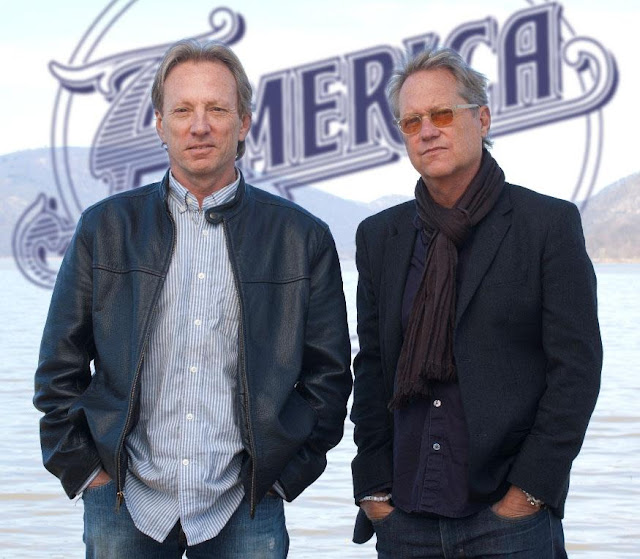 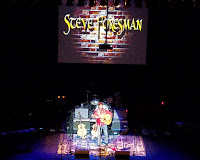 This warm up act was a good choice.  He played folk/folk-rock which matched America’s genre.   Steve had a great voice and filled the theatre with music even as a sole musician.  My only complaint was that his performance was just too short, only about 30 minutes.  I would like to have heard more and I am sure that just like Jonny 2 Bags   we will hear from Steve again.

It was a brave and unusual choice to finish with a David Bowie song as an acoustic performer, but he did it well. 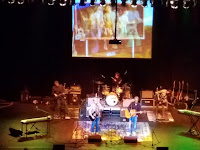 I have often marveled that many of the groups from my teenage years still sound so great. This surprise is true of the vocals in particular, which are effected more by age than playing an instrument.  Of the concerts I have seen in the past two years,  only Heart’s show last year could be called a disappointment.

When America crossed the stage, and started to play Tin Man I was hopeful that the standard I was used to would again be met -- but that did not last long.  When Gerry Beckley started to sing solo, I realized things were definitely not as they should be.

For the first 5 or 6 songs, any song that called upon Gerry to sing solo or to sing with background vocals and not as part of a harmony was disappointing.    His vocals were either flat or he strained to reach the higher notes and often fell short.  Daisy Jane was bad.  I looked around me and I was not the only one who noticed that this was not good.   A few songs into the show, when America was performing Driving it improved was slightly, but he was still not hitting the upper range.

Without a definitive reason, I am left to wonder about the cause:  was he having problems hearingown voice and could only stay on key when he had someone else match pitch with or did he just fail to warm up properly?  In contrast, Dewey Bunnell’s vocals were consistently good through the whole concert.  Ventura Highway and the cover of California Dreamin’ were both great.
his

The sole saving grace was that overall the music played during the concert was superb.

To give credit where it is due, Gerry did play well.  His guitar (6 and 12 string/acoustic and electric) was very good and enjoyable to listen to.  He also gave a good performance on keyboard and harmonica.  Dewey’s playing was likewise on target.  I was unaware that he only played guitar until this concert, but he supplied steady rhythm guitar throughout. 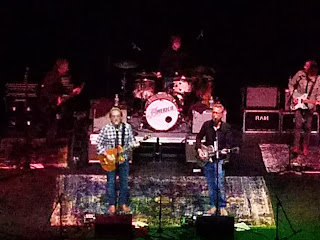 Richard Campbell gave a solid performance playing bass and providing the harmonizing vocals that had been historically provided by the late Dan Peek.  I did get the feeling that he wanted to do more but was prevented from really busting loose by the front-men.

Ryland Steen is a great drummer.  He was more than just a rhythm keeper, elevating the drums and making them a vital part of every song.  America performed a cover of The Beatles' Eleanor Rigby and the drums, which were almost non-existent in the original recording, were brought out by Ryland giving the song a truly new interpretation.  He was entertaining to watch as well and seemed to be having a great time contributing to every number.  Ryland is truly the best drummer I have ever seen live and he is now in my list of the top 3 drummers of all time.

Andy Barr showed great versatility playing guitars, banjo (Don't Cross the River), keyboards, and providing backing and (in one case) lead vocals.  His solos were crisp and accurate.  He also proved himself to be a superior musician by making his performance about the music and not his own on stage antics. 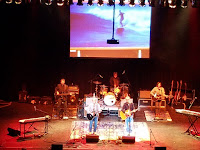 I am not sure of the point of America’s set list.  At first, they seemed to be going chronologically, but then threw in random songs that weren’t in order.  The benefit of a chronological performance is that you can actually listen to the band’s music maturing -- I even like sets that seem to follow a fast and slow pattern.  This set list appeared to be almost random.  In particular, I think they would have been better served to make A Horse With No Name the last song with Sister Golden Hair as the encore, rather than the way they did it, the other way around. Looking strictly at building up to a climactic end, and not the relative sales of either song or the ability of both songs to get the audience on their feet,  A Horse With No Name is just a better build up to a Sister Golden Hair finish.

America has been around for almost 50 years which is a testament to both their music and the memories it left in people.  To give anything less than a worthy performance is just wrong.  I cannot recommend seeing them live to anyone on any level based on the amount paid and the performance received.  It actually hurt my memory of the band and their music.