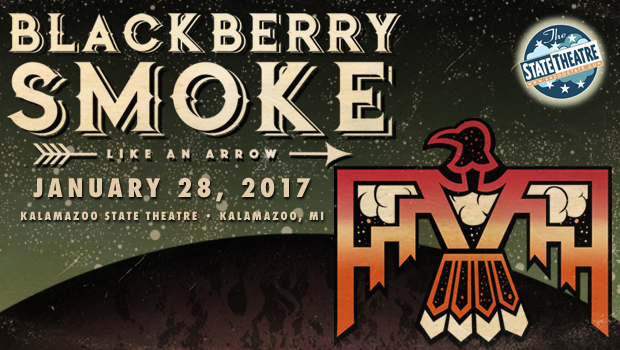 This concert was affected by the notorious weather of Michigan. It was originally scheduled to start at 8 PM with The Steel Woods leading off followed by Blackberry Smoke. However Blackberry Smoke was delayed on the road and the venue opted to have The Steel Woods perform as scheduled and the delayed Blackberry Smoke go on stage at 10:30 PM. This left the audience with an approximate two hour intermission between the two acts. Which means, the warm up band really wasn't a warm-up it actually became an act all its own. To give the credit where it is due, the theater did arrange for discounts to be given by the bars and restaurants right in the vicinity so if you wanted to you could leave the theater and enjoy a quick bite to eat or drink between the two performances. 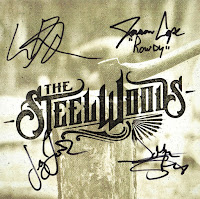 I had never heard of The Steel Woods before this evening, but I am satisfied that all of us will be hearing more from them in the future. They did a dynamite performance that had Not only covers but also some of their original material. The cover they did of The Allman Brother's Whipping Post was everything that it could possibly be. They downplayed the keyboard replacing it with strong guitar riffs, the vocals were dynamite, the solos and breaks were awesome and the drums were excellent. Even though their original songs were unfamiliar, they were instantly likable with great hooks. I have often found that Southern Rock is really hard to define because it is somewhere betwixt and between Country, Blues, and Hard Rock, but these guys were dead on that genre. When the intermission occurred, rather than going to grab a bite to eat or a drink, I chose to hang out in the lobby of the theater and had a chance to meet the band, and have my photo taken with them. Really nice guys who appear to be dedicated to their music. I even opted to buy a copy of their CD so that I could enjoy their music again later. 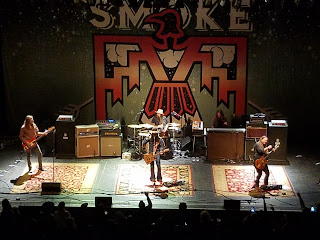 I was only peripherally aware of Blackberry Smoke until a few months ago. My frustration at the cancellation of the July Lynyrd Skynyrd concert convinced me that I might need to look for other bands that perform the same style of Southern Rock.  A search of the Internet led me to several different bands who were considered to be heirs apparent to Lynyrd Skynyrd's legacy,  the one that always topped the lists  was Blackberry Smoke. I was unaware of it until later but I had already heard the group before on the One More For the Fans CD performing Workin' For the MCA. I was in the process of checking out their albums when it was announced that they were coming in concert to the Kalamazoo State Theatre, .So I decided to give him a chance to impress me in person and I grabbed some tickets.

They actually went on stage about 10:15 PM, not wanting to hold off any longer than necessary I guess. They performed six songs before they took the first break to say a word other than a quick Thank You for the applause at the end of each song. They were  excellent and the band worked well together,  I don't recall hearing a cover song all evening, but their style of play and the way that their original songs were arranged could easily be called Skynyrdesque. If they are reading this, I hope they take that is the complement that I mean it to be. 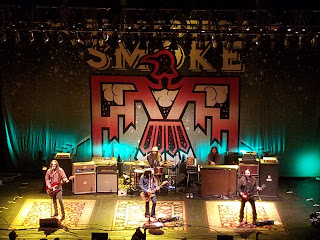 It is bold to open a show with a song that is a cover,  the only way to do it is to make it so much your own that people see it as belonging to you in spite of the prior version.  The way Smoke played Little Richard’s Southern Child was a lesson in how to open with a cover.  They owned it – I didn’t even think of the Little Richard version until midway through the song.  The only covers they did was midway through the show when they did some Led Zeppelin covers (Sleeping Dogs / Your Time Is Gonna Come-Black Dog) and during the encore.  My feelings about d with doing in encore with a cover is the same as opening with one – they owned that too. 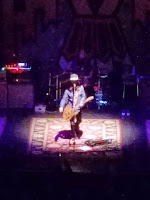 High points to me during the show were Six Ways to Sunday, Waiting for the Thunder, Ain't Got the Blues, and Payback's a Bitch.  Every song they played was good in its own right, but those stood out and stayed with me.  Most of the songs were off their recently released Like an Arrow album.  Overall, the the show, was very tight. They had little dead air between tunes and they moved from one song straight to the next without taking long stretches to talk.

After their last song, they performed an additional three tunes as an encore; including a Little Feat cover of Fat Man In The Bathtub and The Allman Brothers Band tune Southbound. The concert wrapped up at about a quarter past midnight -- which means they performed a solid two hour show.