At Last, A Teller of Tales 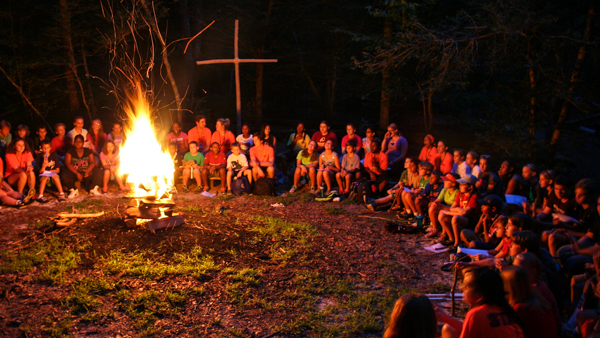 Way back when I was 10 years old or so, I went to my first sleep away camp at Lake Arrowhead, California which was run by the YMCA.  There are many things I could write about the camp, just like everyone else who has gone to camp, it is impossible to escape without more than a few One time at camp stories.  But it was at this camp that I found out what I wanted to be when I grew up.

Every night of the week we were there, there was a huge bonfire down by the lake right at sunset.  It seemed like there were thousands of us gathered there, but in reality, it was probably only 2-300 boys gathered around in a semi-circle being led in cheers, songs and watching skits.  All of this was new to me.  I was not a Scout yet, so camp was a big bag full of new stuff to be a part.  Then at the end of the evening came an act that changed my life.

Too many years have passed since I have given this serious thought, so the character’s name escapes me now, but I remember the important parts.  He walked out slowly from the darkness, using a cane to walk and wearing a jungle explorer jacket and pith helmet.  His beard was long and obviously fake, and he wore wire-rimmed glasses.  Everyone fell silent as he walked to the center of the fire ring, and then some staff member from the side ran to center stage and placed a small stool a few feet in front of the fire.  The interloper slowly sat down on the stool and then took off his glasses and cleaned them using a handkerchief he had taken out of one of his many pockets.    No one said a word as all this happened and the only sound was the crackling of the fire that roared behind him.

I can’t really recall any of the qualities of his voice other than it was clear and loud enough for all of us to hear.  Even among us first timers, there was a sense of expectation as he cleared his throat and then began to speak.  Then, he told us a story.  It was something I had never heard before, and as he spoke, he used facial expressions and hand gestures to emphasize points.  The story was a combination of local legend, tall tales, and humor; all told using various voices and sound effects he provided.  The assembled crowd was no longer silent as we laughed, cheered, and shouted comments as all this went on.  The story would go one for several minutes, and as it did, the teller of tales would eventually stand and walk from side to side in front of the assembled crowd as his story came to the climax; his gestures getting more wild and inspiring excitement.

When he finished his story, he would slowly drop his hands to his side and lower his head – as the absolute silence returned.  Then, as if on cue, we all exploded in loud cheering and applause.   Over the course of my life, I have come to realize that what we all witnessed was a master storyteller sharing his craft.  I went back to my cabin every night of camp inspired and knowing the career path I wanted for my life.  I wanted to be a storyteller too.

Later when I was a Scout and an adult Scout leader, I had my chance to tell tales around a campfire from time to time (even adding a guitar now and then), but it was never a full-time pursuit.  As years went, reality sank in, and I pursued a very satisfying but different career path that has provided well for myself and family, but I never forgot those nights around the lake or the desire to be a storyteller.

Fast forward a few decades to 2012 or so, Camp Arifjan in Kuwait.  I was working as chief technologist for a transportation unit and a new Deputy Commander, was holding a team building session with the staff asking us to share something we had as a goal or dream when we were younger.  This meeting was one of a series of sessions held by LtCol Dan Ellis, a Reservist from Florida, with a prior session including something new we were doing since being assigned there to constructively fill our time.

During that prior session, I talked about writing and maintaining this blog.  For today’s session, I related the story above and expressed a small bit of regret that I had yet to become the storyteller I envisioned.    LtCol Ellis pointed out something that had never occurred to me before – I was a storyteller -- through my blog.

Sometimes it takes someone outside of you to point out a truth you are too close to see.  I am glad Dan did, and I am grateful to him for doing so.  Someday, I may get a chance to be a purest and experience that feeling as I walk out before a crowd in front of a roaring fire, wearing a story teller costume with a cane in hand to tell tall tales.  Pausing at just the right moments for the listeners to reflect on the words I have spoken.
Until then I am telling stories a different way, via this blog and via my fiction writing.  A career path chosen so long ago, now being realized every day, full time.