It Becomes Part of You, Even Though You Weren't Even There

Sometimes, you see an ad for an old movie or you come across one playing on TV, and even though you've never seen that movie you know what it is. For me, the most notable of those is The Last Picture Show.

When my dad was assigned to Fort Sill, I hung out with a group of friends whose major source of entertainment was the base theater which was within walking distance of where we all lived. Actually, it was within biking distance but we were at the age when biking was no longer cool but walking as a group was. I wrote about this before, and pointed out that the real reason for going to the theater had nothing at all to do with the movie - it just served as a space for socializing.

We were always at the base theater for the late show on Friday, which was shown at 11 PM, and the really late show on Saturday night, which started at 1 AM Sunday morning. The admission was only a buck, popcorn another buck. We, as a group, would share a single soda since refills were free. I can't imagine any teenager now sharing a single soda between five or six people-- somehow we survived.

The base theater mostly showed films that were either B movies, like Chrome and Hot Leather, or anything by Bruce Lee.  But occasionally we would get a movie several years after release, like 2001: A Space Odyssey. Because all of us were seeing the movies together, it was a big part of our shared experience with lines from the movies making it into our conversations. It gave us a common history -- until I got strep throat.

After spending Wednesday and Thursday at home sick, I wasn't allowed to go to the movies that weekend even though I had begun to feel better. I missed Billy Jack, which I caught on TV a couple of years later – – the other movie I missed was The Last Picture Show.

The Last Picture Show had won two Academy Awards after being nominated for eight to include Best Picture. Critics loved the artistry of a movie being released in the 70s that was filmed in black-and-white with a mono soundtrack. It's a story of people coming-of-age in a dying small town in North Texas. Lots of introspection and the angst at realizing that the blossom of youth was fading into the background and the need to be concerned about what is in front of you. A heavy movie for a group of eighth graders. 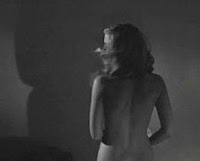 Among my male friends, the biggest takeaways from the movie was seeing Cybill Shepherd nude and the scenes where she loses her virginity to a guy she doesn't really care about because the guy she does care about doesn't date virgins. . Yes, it was rated R and junior high schoolers shouldn't have been allowed to buy tickets to begin with but that's the way it works sometimes.

As I said, I didn't get to go to the movie. TV standards being what they were for years after, I never had a chance to see it later either. Life went on, years passed -- then, thanks to things like HBO I was provided the opportunity to see The Last Picture Show in all his glory, unedited and uncensored. I just didn't. I was beyond it. My life had gone on and I put my adolescence in a box up on the shelf like most people.

Last week I caught an ad for the film showing on a streaming service. Uncut, unedited, and uncensored. I passed. At this point, not seeing the movie has become part of my personal history left unexplored and I've decided to keep it that way. Sometimes, a movie left unseen is a better memory than one that was.