A Trip to the Sacred Store 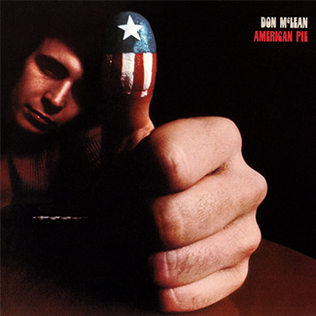 Long long time ago, I can still remember how that music used to make me smile

The first time I heard those lyrics was in the late spring of 1972. At thirteen years old, I was just becoming aware of music in a big way and my radio was constantly on, or I was playing the few 45s or LPs I had on a fold up record player. Then one day, along came this song. I would find out later that the genesis of the song of the death of Buddy Holly, Ritchie Valens, and the Big Bopper. Those three people meant little or nothing to me at that point in my life. I don't mean to make it sound cruel, but the plane crash in Clear Lake and songs of those three musicians occurred before I was born. So what did I find in American Pie? A Story.

Even though I didn't know the background and the symbolism in the lyrics, I knew I was listening to a story. Besides that, the music was great. It started off slow––sped up––rocked for a while in the middle — then, with some somber words it faded out. Those types of shifts within the song are called hooks, and they did exactly what they were supposed to do: they hooked me. Even though it was a solitary voice for most of the song, it was a wonderful voice and one that demanded that you listen to it. Every time it played from the first time I heard it, I sat and allowed it to captivate me for the entire eight minutes and thirty-seven seconds. That is a long time for a thirteen-year-old.

After the first few times I heard it, I did what all teenagers do when they like a song––I memorized the lyrics. No small task back then. You'd have to wait until the radio station played the song again and because of the song's length, they'd only play it every few hours. There was a lot of luck involved to hear it more than once a day. But I did, and eventually I memorized the lyrics. All eight-hundred and sixty-eight of them.

At about the same time, I read Erich von Däniken's Chariots of the Gods? If you're not familiar with it, the book is a hypothesis that the technologies and religions of many ancient civilizations came form by ancient alien astronauts who were welcomed as gods. Regardless of your feelings about the book's ideas, it was among the first that made me think. The author took various bits of history and wove them together to support his theories. It was like finding the holy Grail that explained everything. I'd recall that feeling of accepting a constructed truth when I wrote term papers about cults in high school and college.

Imagine a world without the Internet, where rumors and urban legend traveled by word-of-mouth. You'd be amazed at how quickly it occurred. That's what happened with American Pie, lacking a full explanation from Don McLean, people put together various events that seemed to match the lyrics. The Jester in the song must've been Bob Dylan, the reference to moss growing fat?––it was about the Rolling Stones, and the sergeant's playing the marching tune? Of course, it was a reference to Sgt. Pepper's Lonely Hearts Club Band. Over time, I picked up explanations for every single lyric in the song. All of them seem to match the words to people and events in history.

Last week, I caught the documentary The Day the Music Died/American Pie and in addition to people talking about the significance of the song in their life, Don McLean finally shared how the song was written, the construction of the music on the record, and the meaning of those mysterious lyrics. I don't want to give out any spoilers, but I will tell you everything I heard about the song growing up was wrong, except the reference to the plane crash on 3 February 1959.

Maybe it's because I'm older now, but rather than feeling lied to, I appreciated his words on the subject. As I've often said, when an author writes "the curtains were blue", sometimes it has nothing to do with the fact he was depressed when he wrote the words, it usually means he looked around and noticed––the damn curtains were blue.

After watching the documentary, American Pie made it back into rotation for my daily music breaks. One afternoon, while out running some errands, I was stopped at a stoplight with the windows of my car down and the song playing at near full blast. I was daydreaming, but then something caught my attention and I looked at the cars on either side of me. They too had their windows down and the driver of one car, and all the occupants of the other were singing along with the song. Amazing how universal this piece of music still is.

Note: Don McLean figures into another entry in this blog, he's the inspiration for the song Killing Me Softly  As for plane crashes, the crash that took the lives of Buddy, Ritchie, and the Bopper was just the beginning of tragedy for rock, these two entries are about other musicians who met similar fates: Lynyrd Skynyrd  and Jim Croce