Jet Lag, Life Lag, & Waiting for the Other Max

Coming back to Kuwait I have to deal with 7 hours of jet lag.  I actually dealt with those same 7 hours when I went to the US, but for some reason it always seems easier going West than East. I guess that's because it is easier to stay up later than it is to wake up earlier.  Along with the jet lag, I have to deal with life lag. Unlike going home to family and friends, coming back to work is a totally different experience and it takes a while to get back in the groove.

Things have gone on while I was gone, decisions were made, papers were signed, and things progressed. It is like having a total blackout for that period of time because I have no memory of what did happen even though things continued to happen. Because of this life lag, I experience a severe feeling of being disjointed and disconnected. .Additionally, it is this period of time when karma seems to pick to have things go wrong for me.  But, the  climate change was easier to deal with.

The day I arrived back, I found that my Internet was down – – now only back intermittently – –, my Armed Forces Network (AFN) satellite TV was down and my home and office air conditioners were not working. Added to that were millions of small things, like I broke my watch at some point during the flight back – – probably while I was running from one end of Concourse C to the other end of Concourse D at Washington Dulles Airport. One of the containers of coffee that are brought back with me had burst open inside a box, which also was inside of a plastic bag, but still managed to get all over everything in that particular box. When you add that to too many other things that I won't go into here,  it makes it difficult to think about going on another trip since the trip itself seems to be blamed for everything else that went wrong around it. 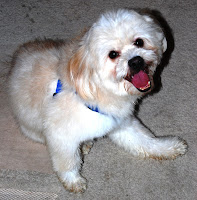 Moving forward lots of positive things are happening in the near future. Sometime in the coming week, another grandson Max will enter the world and bring the total number of grandchildren to 11. Falkor finally has his full coat of fur back, and appears to be happy and well-adjusted after my absence. And yes, they did fix my air-conditioning at home as well as my AFN satellite TV. My sleep schedule is still a bit off, with me waking up at around 3 or 4 in the morning for some unknown reason and not being able to fall back into solid sleep again until right before the alarm rings – – but things appear to be somewhat back in a normal groove. Oh yeah, and the temperatures haven't been over 120° in over three weeks -- Woo Hoo!