The Sounds of the Neighborhood 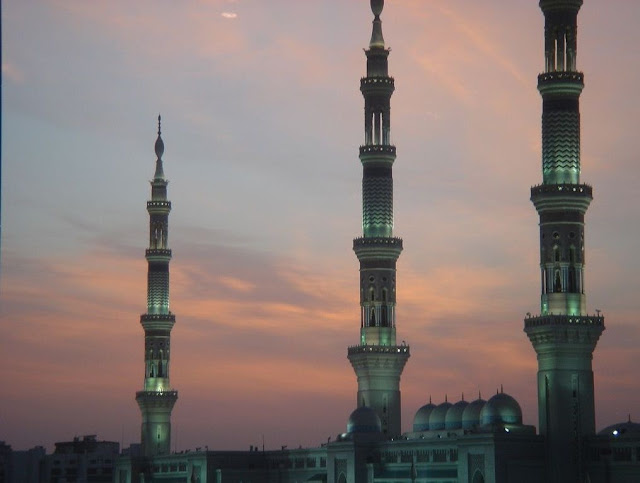 My place in Kuwait sits equidistant between 3 different mosques.  I have no idea if the mosques are Sunni or Shia or if they even have names but as a result of where my place sits, I have a front row seat for the daily calls to prayer.  This is not a bad thing necessarily, but it has led me to notice the calls more than I had in my previous location.

The calls to prayer are done 5 times a day based a solar clock and even though all mosques have minaret’s , where in days of yore the prayer caller would do his job, most calling is done using a PA system and a microphone.  In all my time here, I have never seen a prayer caller doing the call but I am assuming he is somewhere inside the mosque.

During my first week in Kuwait, I took notice of calls and tried to listen to the words – I was listening for words I might recognize and I did find a few.  To me it sounds like singing, but my Muslim friend Saad vehemently disagrees and insists it is not singing.  Saad also told me that there is a college in Jordan where all the prayer callers go to get trained; it is the only one in the world.  At this point, I have heard a few that sounded like they did not get out of prayer caller kindergarten. 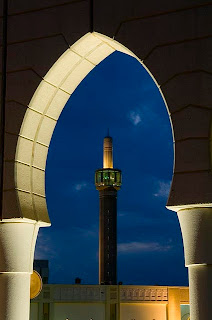 I recall one night at my old apartment when the guy doing the call started to cough in the middle of it and proceeded to cough into the microphone for 3 or 4 minutes with the sound echoing off the surrounding buildings.  Get that man a Riccola.  A day or so later there was a new voice doing the calls and never heard the other guy’s voice again.  Guess getting a cold can be a career ender for a prayer caller.

There are times when the three mosques that I live by now start their calls just a few seconds off from each other or on a slightly different starting note.  The only way to describe it is cacophony.  In Abu Dhabi they have this beat because, according to the guide who did the Grand Mosque tour, only one prayer caller does the deed and it is broadcast to all the mosques in the country at exactly the same time.  It may be uniform, but I think it loses some of the unique flavor of the call too.

Each of the prayer callers for the mosques around me is a little different.  The callers use different emphasis and the pauses, rises and falls – they are all special in their own right.  As it is Ramadan, one of the mosques has a caller performing different types of calls at around 2030 at night – these are not the standard call to prayer but something else that sounds very peaceful and musically intricate.  I enjoy listening to these while I walk Falkor around the neighborhood before we turn in for the night.

Above all, the purpose for these calls are is to let the people know it is time to pray – sort of like a shared spiritual alarm clock.  The words for all the normal calls are the same, except the early morning call that starts with a phrase that I am told means “It is better to pray than sleep” so they are not meant to be a distraction but just a ritualistic part of the day.  I personally think that stopping what you are doing during the day to have a conversation the God is a good thing – it keeps the day and your labors in perspective.

NOTE:  Yeah, there probably is an Arab name for the prayer caller, but I have no idea what it is.  This is ain’t Wikipedia ya know.