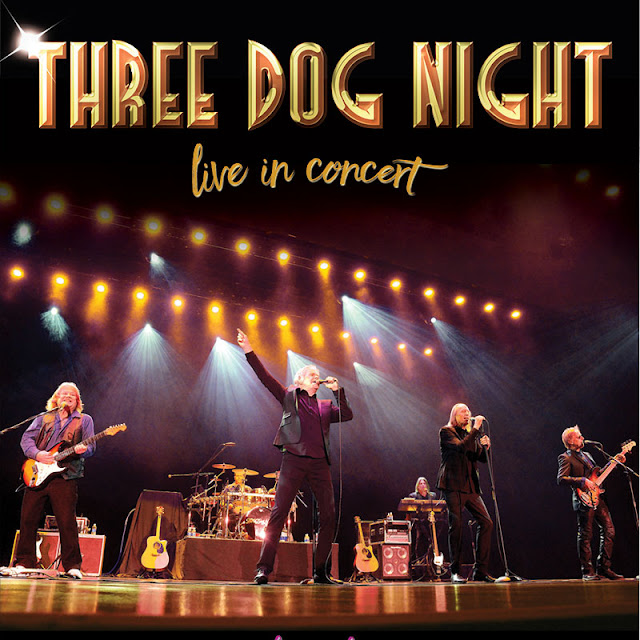 Among the first three LPs I ever bought, was Three Dog Night’s Joy to the World: Their Greatest Hits.  I say among the first three because I really don’t recall which of them came first.  I bought the album because of the title cut, but by the time I listened to the whole record for the first time, I discovered several other songs I was familiar with and developed an appreciation for the remainder. When I saw the band was coming in concert to my favorite venue, I made sure I was first in line to get tickets.

Out of Favor Boys

Like a majority of the backup bands, I was unfamiliar with them before this performance. However, like all backup bands, I paid attention to them. They were excellent, playing a mix of cover and original blues tunes. The full band consists of five pieces, but tonight it was just a duo. I will apologize here for not calling the two musicians by their names but try as I might I can’t find any information on their website or anywhere else that will let me tie these two very talented gentlemen to the names provided for the band’s personnel.

I am a fan of the blues, and these guys provided some great music. The sax player also performed a majority the vocals, and the quality of his voice was perfect for what they were playing. The guitarist, for a few songs, showed off his great talent for using a slide across the strings – – to me, slide guitar is something that just can’t be faked and when it is this good it is excellent.

Yeah, playing two saxes at once is kinda kitschy – but doing it well is talent.

NOTE:  After publication, I heard from the band and they provided the names of the sax player, Tony "T-Bone" Sproul, and the guitarist, Danny Ouellette.

Ever since the disappointments of America and The Marshall Tucker Band I’ve guarded myself against getting overly optimistic at going to see the great bands from my youth in concert. 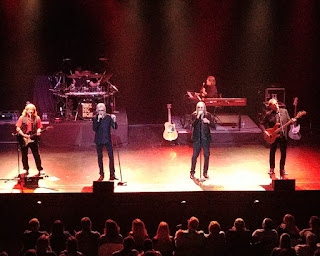 The stage was set, and as I saw the musicians walk out onto it – – I took a deep breath. Then the first few notes of The Family of Man began to play. Then I exhaled and sat back for the next hour or so and enjoyed a positively enjoyable experience. Danny Hutton’s (founder) voice was not only strong enough to hit all the notes for all the songs, but he was also still putting his own spin on each one of them. The same could be said of David Morgan when he started singing Black and White. The real treat was when the two of them harmonized, it was magic.

The setlist included everything from the album I mentioned above, with two notable exceptions: The Show Must Go On and Pieces of April.   I always wonder why artists leave out specific songs from the repertoire when they seem to play all their other hits, but then I guess they have their own reasons.  Of course, the had 21 consecutive Top 40 hits, so they did have a lot to choose from.

I’ve previously talked about how my musical taste evolved starting while I was in Junior High. At about the same time, I became aware of Paul Williams. Paul’s talent wasn’t in performing (sorry Paul) but in songwriting. Over the course of his career, he wrote songs for a variety of performers like Three Dog Night, David Bowie, The Carpenters and many others. What Paul did for me was to bring about an epiphany in my music development:  The performer is not always the songwriter. Up to this point, I thought bands all authored their own music. By becoming aware of his existence, Paul Williams caused me to see it differently and to sometimes seek music based on the songwriter and not the band.  Most of his songs are ballads and has sentimental lyrics. That blend of storytelling is my kind of song.

At about the same time my appreciation of music came about, I started to develop my tastes in cinema. My tastes run far and wide, in fact, the only thing I avoid is one-sided, preachy, political tomes. Aside from his talents as a songwriter for other musicians, Paul wrote the score and started in Brian de Palma’s Phantom of the Paradise.

The movie is basically a retelling of Faust mixed with Phantom of the Opera.  The exceptions are that it is set to modern music and the hero sells his soul to Rock ‘n’ Roll. Even though it is a simple story of good vs. evil, it is still very entertaining. The movie would’ve gained more attention and a wider audience if not for the release of a historic rock opera at about the same time: Tommy.

The one disappointment of the night was not caused by the band, but by the sound engineer. The song One featured vocals by the bass player Paul Kingery, but for some reason, his mic which had been fine when he was singing backup was turned completely down. What made this more aggravating was everyone else in the band had their microphones adequately balanced, so the only thing heard was the backup vocals.  There seemed to be several times when the sound engineer either was just not paying attention to the balance of the microphones.  I’ve said it before, and reviews and I will repeat it here: The sound engineer needs to have a person seated in the theater monitoring what it sounds like from the audience’s perspective and not just from his booth.

Other favorites from the evening included Play Something Sweet (Brickyard Blues), Sure As I’m Sittin. Here, Mama Told Me Not to Come, and Celebrate. Every song was flawlessly performed and full of the energy the songs deserved.

The encores included Eli's Coming, Prayer of the Children, and Joy to the World. I had forgotten Eli entirely and was surprised when they launched into it with resounding guitar intro. It was awesome. Then came the one mistake I think the band made during the evening, and acapella song called Prayer of the Children. 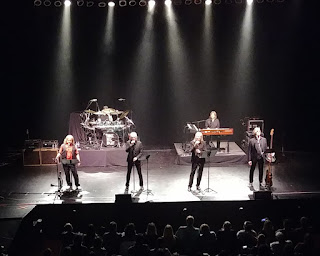 It is tough to say something about a song with that title, and I will state right here I think the song was beautifully performed, the five-part harmony was remarkable and the lyrics outstanding. My problem was the song’s placement. Everything is upbeat during the encore, people are totally fired up and waiting for the band to in the show playing best song in your repertoire. Eli has them more built up and then you go into a slow, light song with reflective lyrics. In my opinion, the song should’ve gone earlier in the show and before or after a more mellow tune like Out in the Country.

Bottom line:  Go see them if given the chance. They do not disappoint.

Given the choice of seeing any show, anywhere in the world, for me, only the band names would change. There is no better indoor venue in the world than Kalamazoo State Theater.  I say this having seen shows in several of the great halls across this country, and in Europe as well as the Far East.

What adds even more to the physical building is the staff. Wonderful people.

Email ThisBlogThis!Share to TwitterShare to FacebookShare to Pinterest
Labels: Kalamazoo State Theatre, My Year In Live Music, Out of Favor Boys, Paul Williams, Phantom if the Paradise, Three Dog Night