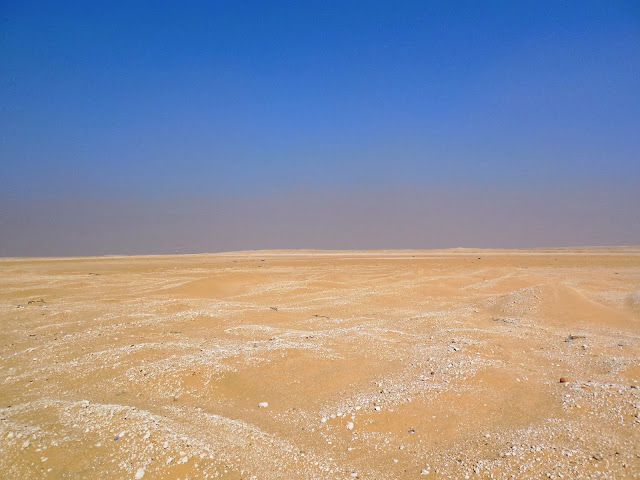 Within a week of arriving here in March 2012, I was told about a vast vehicle graveyard of wrecked and burned out Iraqi armor and other military vehicles that existed out in the desert. I was a little incredulous because so many years had passed, but I was assured that the yard did exist. When you went to the yard, you were not supposed to go alone because if you wanted to get out and explore the vehicles, you needed someone with a baseball bat to watch your back due to the wild dogs. I tucked all this away in my psyche and hadn't given it any further thought until I took the trip down Highway 80. That made me decide it was time for me to try to find this vehicle graveyard

So, yesterday I jumped in my vehicle and headed off to find this place.  I went alone because I didn't plan on getting out and rummaging through the wreckage.  In case you're wondering: Falkor has been staying with a coworker's son for the last few days because the coworker wants to see if the boy is responsible enough to get his own dog.

I had been given additional directions on how to get to this place by several people, so I took them to be the best information available even though none of them had ever personally been there.  I drove off with exploration in mind.  An explanation;   For a long time, none of the US military locations in Kuwait were marked at all. The way you found them was to be taken there by someone else and memorizing the landmarks along the way or getting directions from at least two people who agreed on the route.  The reason they weren't marked was for security, but when you consider most of them are visible on Google Earth, I'm not sure how much good it actually did.

One of the places I passed on my journey was the midway stopping point for most American military on their way to/from Afghanistan from/to the United States; Ali Al-Salem, a joint Kuwaiti and American base. It is also known to many U.S. troops as The Rock.  This is where my son stopped while on his way to and returning from his tour in Afghanistan.  The reason it is called The Rock, is because of a rather large rock that marks the turnoff to get to the base entrance. Now, there are actually signs that point you to the base and even one that says farewell as you leave. 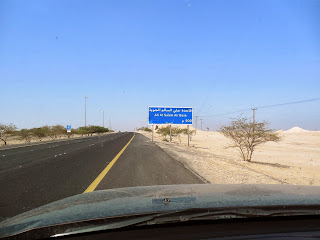 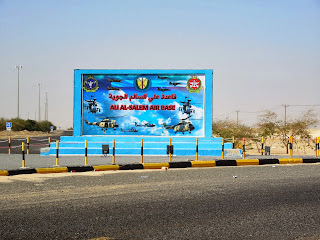 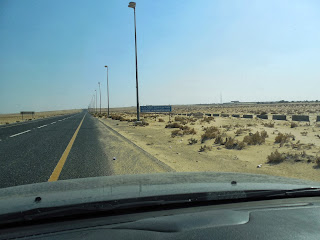 I spent several hours, searching through the desert looking for this mysterious vehicle graveyard that was supposed to be out there. In the end what I saw was a lot of deserted desert. It is so austere out there that my camera’s panorama function would not work because it could not find any features to use as a reference to segment the image.  Occasionally, off in the distance, I would see Bedouin tents and herds of camels, but aside from that, there were miles of nothing except for me in the road. Overall, the driver was kind of relaxing, but I was disappointed that I never found this mysterious vehicle boneyard that was the last remnants of the Iraqi invasion.

I am now at less than a week to go. Things appear to be moving faster as I pack, mail, and generally prepare to get out of here. I am getting a little hyped up.

It's A Simpson's Thing

As I walked out of the restaurant, I said to the Indian waiter, “See you tomorrow Ragesh."

Shaking his head, he responded, "No Sir,   it is my weekend but my coworker Saed will take good care of you."

I smiled and nodded my understanding and said: "Well, then enjoy your weekend."

With a broad smile, Ragesh said "I will Sir, I enjoy weekends. I am not an Apu."