That Dog Is Not Getting On This Airplane

The US military builds an enormous amount of flex time into any travel. Therefore, it was not a big surprise when I found out that I was going to be required to report in at 0945 for a flight that did not leave until the following day at 0230. While there was a great deal of effort made to keep us comfortable and occupied during this lockdown period, it was not the easy on anyone I was anxious to get going. When I reported in, I turned over Falkor's crate and my one suitcase so that I would not have to carry it around all day. For the duration of lockdown I only had Falkor on a leash and my backpack to worry about.

Many of the troops that I was in lockdown with had been deployed to Afghanistan. Most, if not all, had not had contact with a domestic animal during their entire tour so those who were "dog people" kept coming over to pet Falkor.  I did not mind it because the puppy occupied and it also seemed to calm him. At one point a huge Army Sergeant (the kind of guy who blocks out all light when he walks through a doorway) was looking around the room when Falkor caught his eye, at this point his tough Army soldier façade broke down as he walked towards the dog asking in a childlike voice  "Who's a good boy?".  Good to know our Army is full of decent human beings who are not above letting their inner tenderness show.

At about midnight we boarded buses and headed for the airfield. We were going to be traveling on board a chartered commercial Boeing 747.  The ride to the plane was uneventful, but there were several times when we were stopped at various checkpoints and required to wait as headcounts were accomplished, then re-accomplished, then re-accomplished one last time before we were allowed to proceed to the terminal. We exited the bus, and walked into military or terminal. At this point I put Falkor down and let him walk alongside me. As we entered the building one of the clerks working there pointed at Falkor and then looked up at me and said "That dog is not getting on this airplane".

To back up a bit, 45 days prior to this I had started making arrangements for Falkor to leave with me.  I had clearance paperwork from the Kuwaiti government (which had really cool hologram stickers on it – many thanks to Karen Orobey of Pets Passage who took care of that), health certificates, and his arrangements to get on this plane were also approved by several people in the command hierarchy. There was no way in hell this dog was not getting on the airplane.

I really don't recall how colorful my language got at that point, but I made my point about how serious this was, the work that had been done on this ahead of time.  When I realized this was going nowhere, I requested he call his Commander so that I could discuss the situation with him. At that point, the clerk backed off a bit but said I needed to stand aside while he checked on things.  By the way, it is completely within all the rules for a pet to fly on a military chartered aircraft,  it just has to be paid for by the owner and I was prepared to do so having been given the price 45 days prior.

At this point, several discussions took place between this particular clerk and several people behind the counters. I basically stood by silently because if I had said anything at this point, I might have given them other reasons not to put me on the airplane because my language would've become more and more colorful as the situation proceeded. Falkor maintained his cool.

Eventually, the airline liaison came over to see what was going on. The clerk explained situation, the liaison took out his radio and made a quick call and then came back to say that the crew had no problem taking the dog on the plane. The clerk then raised an issue with the fact that I did not have a crate for the dog. I explained that I did have the crate and that it was being loaded right now into the plane’s baggage compartment.  If they would escort me out there I would gladly get the crate. Of course, there was no way the clerk would allow that because it might delay the aircraft’s takeoff – – at which point the airline representative said not to worry about it, that I could take the dog in the cabin. The clerk was visibly pissed and stormed off.

A few minutes later the clerk reappeared to tell me the price for getting the dog on the plane and demanding immediate payment in cash. I think it was the final straw when I handed him exact change. With that part done, Falkor and I headed to the plane with the contract liaison as an escort. He explained on the way that he was a fellow traveler from the East.  We got to the plane and walked up the steps, me with my dog on a leash and not in any kind of carrier.

When we got to the top of the stairs we were met by a flight crew that was completely staffed with "dog people".  Upon seeing the dog they all cooed and gushed over him and then offered us a seat upstairs, in what was normally business-class, as it would be easier to handle the dog in that area. I had no problem with that and we quickly went upstairs, found a seat, and buckled in for takeoff. 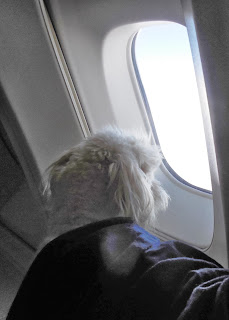 I am not an evil person by nature, but as I gazed out the window back towards the terminal I let look out the window so Falkor could wave goodbye to the clerk who said that there was no way he was getting on this plane.

The flight from Kuwait to Germany was very smooth and uneventful. Falkor sat in the empty seat next to me, he enjoyed that because every time a flight attendant walked by they had to stop and pet him.  I smiled when occurred to me how far he had come from being a cast-off dog that was dehydrated and starving on the streets of Kuwait City in July 2012 to where he was now.

When we got to Ramstein AB, Germany we said goodbye to a really great crew and I immediately took Falkor outside so he could do his business. Then, when I tried to get back in the building I was told Falkor could not come in because he was not in a crate.  I explained that the crate was on the plane and I needed to get in to get the crate.  Not good enough no crate – no admission.  I asked to speak to the NCOIC. 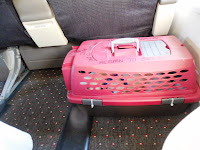 After a few minutes an Air Force Tech Sergeant came up and I explained the situation.  She said they would loan me a crate and make the necessary arrangements for me to get Falkor on the plane.  She returned with a crate and put Falkor in it and then went back through security.

The layover lasted another hour before we were re-boarded.  About this time I was told Falkor would again be going on the plane versus under it.  Good for him, but he was now in a hard-sided crate that needed its own seat.  I went to my assigned seat and one of the flight attendants noticed him and asked if he was the dog that had come out of Kuwait. I told her yes and she said she had heard how well behaved he was.  Then, noticing the seating issue, she got on the intercom and after a brief conversation I was told we had been reassigned to the seats upstairs that we had been in for our last flight.  Worked for me and once we took off the flight attendants let me take Falkor out of the crate so he could snooze on my lap.

The flight was quiet and 8 hours or so later we arrived in Baltimore, our first stateside stop.

Clearing Falkor into the US was probably one of the fastest most efficient processes I hit during the entire trip home.  Gave them the paperwork and 2 minutes later Falkor was a legal immigrant.

Baltimore Airport has a nice pet break area, but the USO in the airport would not allow him to enter, even in a crate, so we spent 8 hours waiting in the open terminal area.  At least they had free internet access.  I was kind of surprised at the USO considering the number of military families who travel through there going to/from Europe.

We finally boarded our last flight and found we were in the last section of a packed plane; at least I had an aisle seat.  I sat Falkor, in his carrier, on my seat and stepped to the back to make boarding easier for others.  A passenger stopped at my row and after much grumbling and complaining to the flight attendant about needing a seat change, took his place in the middle seat.  He sat there for a few minutes and then pushed the call button.

When the flight attendant showed up, he proceeded into a long diatribe about his severe allergy to dogs and demanded he be moved to a different seat at the front of the plane.  The flight attendant said she would call and check but it might be impossible since the flight was full.  I was okay with this, the empty seat in the middle would give me a little more room and I really didn’t want anyone with an attitude sitting next to me for 3 hours.

The flight attendant returned and told him she had the solution as there was an open seat in the Elite Class section at the front of the plane.  She waited a moment which gave him time to grin ear to ear and begin to gather his stuff; then she explained that Falkor and I would be moving to that seat so we would not be close to him and cause him allergic distress.

As I gathered my bags and began to move to the front of the plane, I could hear him arguing with her that his allergies would still be a problem because the dog had been in this vicinity and that he needed to be the one to go to the Elite seat.   The last I heard was her telling him that during the inbound flight a dog had been in the seat I was going to and that would present the same problem.  She did offer him the option of deplaning and waiting for the next flight.

Once again, Falkor had gotten us a nice upgrade and we were able to catch a quick nap on the way to Detroit and home.  The lesson: Travel with a small, cute dog.

Postscript:  Falkor had one final move before getting to his forever home in the US.  Due to the passing of her in-house dog prior to my return, my daughter took Falkor to live with her family in Kansas.  She says he quickly made himself a part of the family. The pup has 3 young boys to chase, two bigger dogs and a cat to play with and a guinea pig to growl at through the cage bars.  Falkor also has lots of these funny looking things he had never seen before to chase all over the yard – squirrels.

That to me is a Happy Ending.