My Summer of Live Rock & Roll, 2017 Edition - The Mersey Beatles 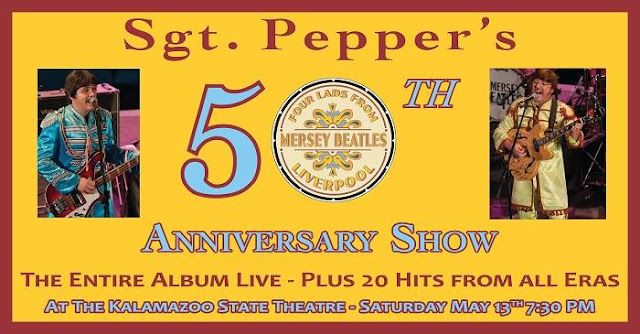 I am not sure when I first heard a Beatles' song or which one it was, but I do know I bought my first Beatles’ album during the summer of 1974 and it was The Beatles Yesterday and Today -- I still have that well-worn piece of vinyl.  That album was first published 11 years before I bought it and the Beatles  broke up 4 years before I became a fan.

Over the course of my life I have owned nearly all of their albums, I never saw a need for 6 different studio cuts of a song that were deemed not be good enough to keep when first produced, but now are considered the Holy Grail.  One of my favorite albums by the Beatles was Sgt. Pepper’s Lonely Hearts Club Band; which I no longer have.  I took the album to a barber shop trying to explain that I wanted a haircut like John’s from the gatefold photo – I have always been very specific about how I like my hair --- the barber screwed up and I was so upset when I left that I walked out leaving my album there.

Even though I was in Hamburg in 1960 when the group made their appearances at the Indra Club in Hamburg, I don’t recall getting in to see the band -- after all I was only one.  So, the chance to see the Beatles live never existed except through Cover or Tribute bands.  Those terms are NOT interchangeable, a Cover band just plays another band’s songs, whereas a Tribute band tries to recapture the actual look and feel of the original.  So far, I have seen five different Beatles Tribute bands: two mediocre bands whose names I cannot recall performing at various large open venues (Air show & Country Fair), the worst was Beatlemania (performing at the worst venue in Michigan) and the best was Rain – until now.  Now, I have to give the title of best Tribute band to The Mersey Beatles.

I have developed a mental checklist for Tribute bands and I weigh each band I see against the list as a way to compare and judge.  Physical appearance really doesn’t come in to play – getting the hair and clothes right matter more than whether or not the musician looks like Paul or Ringo.  What matters most is musical quality and the ability for me to close my eyes and be mentally taken to the original.   There are nuances that really display the extent to which the band has gone to make the performance an experience – is John’s stance right while playing (cool and in control), Ringo’s facial expressions and smile as he plays while rocking back and forth, does Paul shake his head while singing the Oooo's in She Loves You, and does George come to the front when playing and then step back when playing rhythm.  Things like the correct instruments (Gretsch & Rickenbacher guitars, Hofner Classic Bass, Ludwig drum kit etc) and stage presence are crucial.  I have gotten over the need for Paul to play left handed – I would rather hear the music played well than forcing a musician to relearn how to play with the opposite hand.  Here is how the The Mersey Beatles did and why I now consider them my best seen to date.

A Few Notes on Sgt. Pepper’s 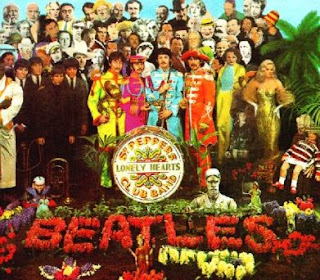 Released in 1967, it was the first studio album that the Beatles released that was NEVER intended to be performed live.  The band had just reunited in the studio after a short break following a grueling tour and they made the unanimous decision not to tour again -- feeling that the performances on the road were more about the event than about the music.  Watch any old videos of them and you will agree.  As a result, the music on Sgt. Pepper had a wider variety of instruments and recording techniques than they had ever used before.  The result was a masterpiece that ranks near the top of any list of top albums ever recorded.  Penny Lane and Strawberry Fields were recorded for the album, but instead were released as a double A side 45. Producer George Martin said he always regretted that decision.  I love both songs, but I also see how they fit into Sgt. Pepper.

The band’s “hook” is that all four of the band members were born and live in Liverpool, but I think the fact that they were the house band at The Cavern Club (also in Liverpool) is more impressive.  The club is a Mecca for Beatle’s fans and a bad copy would not be accepted or last as they would be the most critical audience of all.  The show began with a video short of the band’s history which ended with a list of tour dates that included local landmarks – good way to get the crowd on your side from the start. 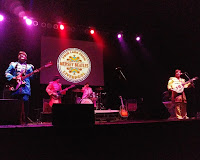 The Mersey Beatles took the stage and in proper attire played Sgt. Pepper’s Lonely Hearts Club Band album, including Penny Lane and Strawberry Fields.  The costumes were dead-on and even had the fringe on the bottom edge of the coats, a detail usually overlooked.  The band played the entire album, in order, start to finish.  The placement of the two added songs were probably based on producer Sir George Martin’s original intent, as they fit where placed.  The music was amazing and since it had been awhile since I heard the entire album played that way it was a real treat. 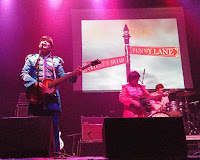 The banter between the band member sand the audience was all in character and added to the authentic feel of the evening.  While a lot of people sang along with every song, the band encouraged participation for When I'm Sixty-Four that had the whole crowd participating.  Great fun.

My only negative comment about this section of the show is the facial hair.  Instead of wearing mustache wigs the band had them drawn on.  From a distance, it might have looked acceptable but I was in the front row and it did not pass muster.  Having done stage productions that involved adding artificial facial hair, I know it can be time consuming – but worth every minute for the correct appearance on stage.

After intermission, The Mersey Beatles turned back the clock and returned to stage dressed in the Fab Four’s trademark suits and boots to play the music that became labeled as the British Invasion.  All of it was perfect and the sequence of the songs made sense. Several individual songs garnered standing ovations which the band seemed to feed off.  The harmonies were terrific and songs like My Life were like individual presents enjoyed one at a time.  I will admit that I channeled Ferris Bueller and danced in the aisle to Twist and Shout.

They transitioned wardrobe, hair, and music to play songs from the Abbey Road, Revolver, and Rubber Soul albums. It was great to hear all those live, as most Tribute bans concentrate on the early Beatles.  Even though not a Beatles song, John performed one of my favorite John Lennon songs – Imagine.  It was beautiful.  Get Back and Revolution were magnificent and the sing a long for Hey Jude also noteworthy.

A few minor cons…. Ringo was only featured on one number in this section of the show.  I was too busy enjoying the show to record a proper setlist so it may or may not have been Honey Don’t.  In my opinion, there were better choices – Act Naturally came immediately to mind as it would have fit the timeline they were on.  It should be noted that Ringo only sang 11 tunes with Beatles, With a Little Help From My Friends was done during the first half of this show.  Also, the musician playing George has serious guitar skills, and I was looking forward to hearing While My Guitar Gently Weeps – alas it was not played.

George (David Howard) – The lead guitar segments were fantastic and alive.  He was obviously having a good time and provided the joker persona George was famous for, most Tribute bands get that wrong.  Within Without You was cosmic.

John (Mark Bloor) – From the on-stage banter to the transition of his personality through the timeline – it was like watching John.  The voice, playing and appearance were all solid.  The portrayal was polished and professional.  He also seemed to command the stage the way John had a tendency to do – it worked.  Come Together and Imagine were wonderful.

Paul (Steven Howard) – The performance was a little inconsistent – when he was on he was really on – you could close your eyes and hear Paul – notable were Yesterday and Let It Be but a few times he appeared to drop character and even head off away from the rest of the band.


Billy Preston/George Martin (Tony Cook) – Playing all the keyboards plus the added horns, calliope and sound effects plus production items was no small task.  I hope this musician knows that I for one realize and appreciate the difficulty and admire his immense talent.  Well done.

I am not sure what it says when I still rate the band as the best Beatle’s Tribute Band I have ever seen but say that Paul’s performance was a little unsteady.  I guess the other three were had significant enough chops to carry the overall performance -- and like I said -- when he was on -- he was on. 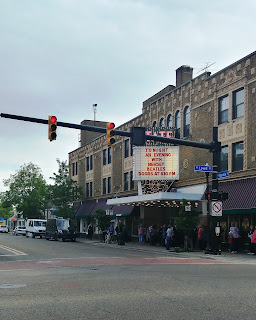 I have run out of ways of saying that the Kalamazoo State Theatre is the best venue in the state of Michigan.  My thesaurus suggested I use:  unsurpassed, superlative, preeminent, paramount, Grade A, elite, crème de la crème and most excellent (apparently, my thesaurus channels Bill & Ted).  It is all those things and more.  To read other most excellent words about the Kalamazoo State Theatre that I have said in the near past, check out any of my reviews for performances there:

The Temptations, Blackberry Smoke, The Brian Setzer Orchestra, Wizard’s of Winter, and  America.